BALTIMORE (8/21/15)--Credit unions are batting 1,000 when it comes to baseball-related awareness events this summer.

For example, a dozen Baltimore-area credit unions sponsored a fireworks show that followed a Baltimore Orioles baseball game at Camden Yards last week as part of an ongoing effort to raise awareness of the movement. 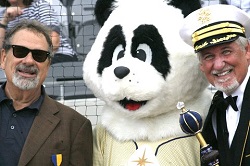 “This event was a tremendous opportunity to highlight Baltimore area credit unions,” said John Bratsakis, president/CEO, Maryland and D.C. Credit Union Association. “With more than 100 million members nationally, it is important that we continue to take advantage of high-profile opportunities to tell the story of how credit unions make a difference in the lives of their members.”

In addition to sponsoring the fireworks, the first 1,000 fans entering Camden Yards received a free can coozie and an informational flyer about credit unions. The logo of each of the 12 credit unions that co-sponsored the event was flashed on the scoreboard throughout the game.

In Minnesota, SPIRE CU, Falcon Heights, Minn., hosted a medieval times-themed baseball event at a St. Paul Saints Baseball game. During the night, which saw 8,500 fans in attendance, fans received a number of SPIRE promotional items. There was also a mass-knighting of everyone in attendance.

Participants, each of whom received four tickets to a Brooklyn Cyclones game later that night, engaged in fielding, running and throwing drills put on by Cyclones players.

Virginia credit unions also got in on the baseball action recently, as Richmond, Va.-based Virginia CU made a donation of $5,000 to FeedMore.org earlier this month. The amount was based on an estimate of the number of strikeouts the Richmond Flying Squirrels will rack up during the regular season and playoffs this year.