ALEXANDRIA, Va. (8/21/15)--A behind-the-scenes look at regulatory relief deliberations and an example calculation for the overhead transfer rate (OTR) highlight this month’s The NCUA Report.

The National Credit Union Administration released the latest issue of the publication Thursday.

In her monthly column, NCUA Chair Debbie Matz gave insights into how recent regulatory relief decisions are made at the agency. For example, the agency’s fixed-assets proposal that was finalized at last month’s board meeting had been in the works for more than two years, after the agency finalized technical corrections to the rule.

“Vice Chairman Rick Metsger, speaking at his first NCUA board meeting, asked staff if we could go beyond the technical changes and consider more substantive changes,” Matz wrote, adding that Metsger’s question led the agency to ask a new series of questions regarding fixed assets. 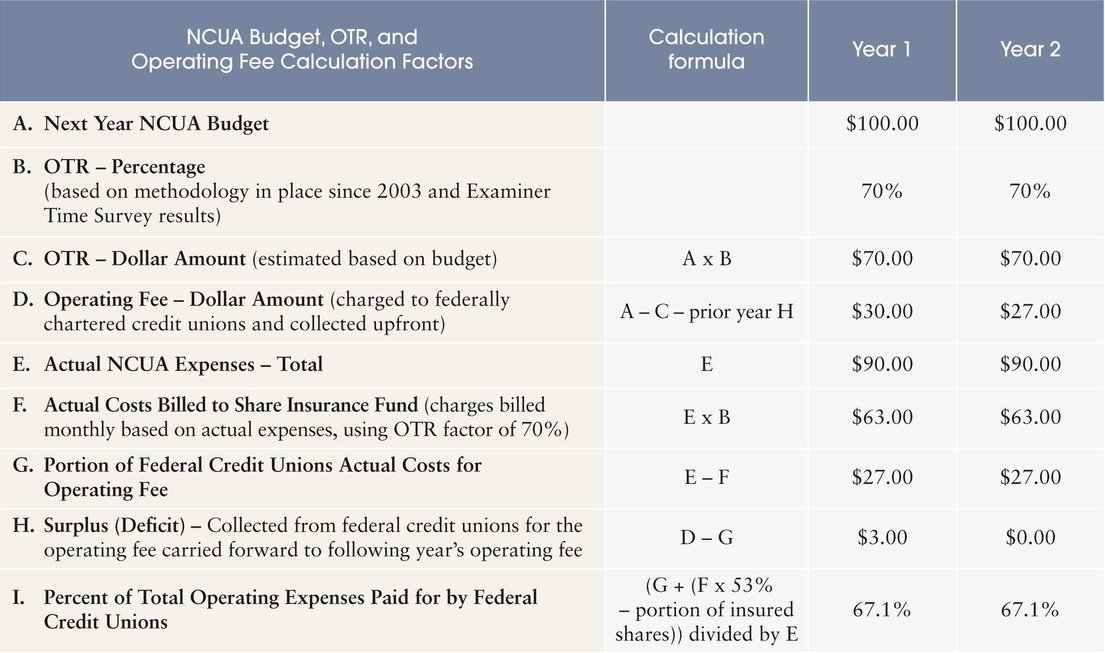 Click image to enlarge. A sample overhead transfer rate calculation from this month's The NCUA Report.

Matz outlined NCUA staff efforts to research the history of the 5% fixed-assets limit, and how the questions that arose led the NCUA to formally propose the rule to eliminate the limit.

“Behind every regulatory change is a series of extensive discussions and often intense deliberations," she said.

The publication also contains a look at how the OTR and operating fee work. The OTR is designed to cover the NCUA’s costs of examining and supervising risk to the share insurance fund, and the operating fee covers the portion of operational costs for non-insurance related aspects of operating the agency.

According to the NCUA, federal credit unions will cover 66.4% of the agency’s 2015 budgeted operating expenses of $279.5 million, given the board-approved OTR of 71.8%.

CUNA noted last November, when the agency’s 2015 operating budget was open for comment, that the OTR is at an all-time high, and has pushed for further transparency regarding its calculation.

"CUNA appreciates the agency's recent efforts to provide additional information in the area of the OTR but we continue to seek full transparency on the way NCUA allocates credit unions' resources," said Luke Martone, senior director of advocacy for CUNA.

Other items in The NCUA Report include: