Housing’s importance to the economy is undeniable, with a healthy housing market essential to robust economic growth. 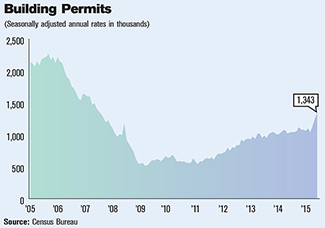 Builders believe the housing market is in great shape, according to the National Association of Home Builders (NAHB) Housing Market Index. This is a monthly survey of builders who rate market conditions for the sale of new homes at the present time and in the next six months, as well as the traffic of prospective buyers of new homes.

Part of the reason for builder optimism is strong home sales. National Association of Realtors data, for example, reflects strong existing home sales, with June activity up 3.2% to an annual sales rate of 5.49 million units. That result puts sales at the highest rate since February 2007.

Moreover, June’s gain comes on the heels of a 4.5% increase in May, and year-over-year sales are up a very strong 9.6%.

U.S. Census Bureau data also shows strong gains in new-home sales. Analysts expected another big increase in June, but were disappointed by a 6.8% decline during the month to an annual sales rate of 482,000 units. Still, the 18.1% year- over-year increase in new-home sales is solid.

Overall, housing starts were up 9.8% in June at a 1.174 million annual rate on the strength of a 29.4% jump in the multifamily component (the single-family component fell 0.9%). The same pattern appears for permits, which jumped 7% overall to a much higher than expected 1.337 million annual rate, with multifamily units up 15.3% and single-family units up 1.6%.

Fact is, building permits are one of the 10 key components in the Conference Board’s Index of Leading Economic Indicators.

On the back of strong sales, home prices are increasing at healthy—and sustainable—rates almost everywhere you look. The Federal Housing Finance Agency’s (FHFA) home price index increased 0.4% in May, following an upward revised 0.4% in April.

During the past year, the FHFA index is up 5.7%—the strongest year-over-year advance since April 2014. The index now stands at a level last seen in September 2007 and is less than 2% below its peak in March 2007.

All of this has more consumers entering the market—which translates to more business for credit union mortgage departments. The Mortgage Banker’s Association Weekly Application composite index is up 10.4% during the past 12 months, the refinance index is up 4.3%, and the purchase index is up an eye-popping 18.2%.

CUNA’s Monthly Credit Union Estimates reflects this strength with overall first mortgages up a healthy 9.2% during the year ended May 2015.

The Federal Reserve Board is expected to begin raising short-term rates in the near future, which worries some observers. But these increases should be modest, and the underpinnings of the current recovery, including a greatly improved labor market, higher wages, and lofty consumer confidence, promise to keep housing humming along for the foreseeable future.

MIKE SCHENK is vice president of CUNA’s economics and statistics department. Contact him at 608-231-4228 or at mschenk@cuna.coop.