Members of the Maine Credit Union League (MCUL), as well as member credit unions, heard from King, who said he is on his “let’s not wait for Congress to act” tour. 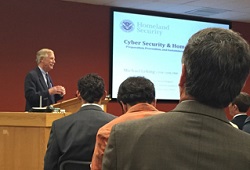 “This is an issue that is not going away anytime soon and is of great concern to Maine's credit unions,” said league President John Murphy, adding his thanks to King for organizing the event and including credit unions in the discussion.

King has spoken frequently about the financial impact of data breaches and has cited the league when making his case.

“Cyberattacks and data breaches are some of the most serious threats we face today--not just to our national security, but to our economic security as well,” King said. “And businesses in Maine can’t simply wait around hoping that Congress will finally come to its senses and pass cybersecurity legislation to help them out.”

King voted in support of the Cybersecurity Information Sharing Act (CISA) of 2015 (S. 754) in March as a member of the Senate Select Committee on Intelligence. The bill passed the committee 14-1 and will be considered by the full Senate when it returns from recess.

CUNA believes CISA a good start but is pushing for even stronger legislation, such as S. 961, the Data Security Act of 2015, that would enact a robust national data protection standard for retailers and others in the payments stream.  Credit unions and other financial institutions are already subject to under strong data security standards under the Gramm-Leach Bliley Act.

CUNA has also supported the Protecting Cyber Networks Act (H.R. 1560), which passed the House in April. The bill allows sharing of cyberthreat information between private sector and government entities.