ST. LOUIS (8/24/15)--General awareness of and consumer interest in joining credit unions in Missouri has improved dramatically as a result of the statewide Bank on More campaign, according to the most recent data from the Missouri Credit Union Association (MCUA).

General awareness of credit unions is improving as 62% of nonmember respondents knew “quite a bit/great deal” or “just some” about credit unions, compared with 50% in 2011. 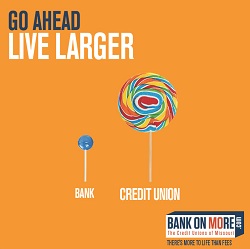 Perhaps just as importantly, once consumers are educated about credit unions, their interest heightened.

To test the effectiveness of Bank On More, the statewide consumer awareness campaign designed to inform nonmembers of the benefits of membership, MCUA commissioned a public opinion poll. The public opinion poll consisted of focus groups and an online survey that concluded in February.

Other key findings and recommendations from the poll: