The network CU option may be the answer to long-term small CU sustainability.

Above: Hoosier Hills CU CEO George McNichols has been a driving force behind the concept of network CUs.

A concept championed by Hoosier Hills Credit Union CEO George McNichols aims to prevent this all-to-common scenario: A $30 million asset credit union celebrates its 50th anniversary, and the board is justly proud of the cooperative’s distinguished history. Photos of the founding officers line the walls of the branch, which still looks much as it did as when it opened in 1965.

But with a staff of five, the credit union’s CEO finds it hard to keep up with the avalanche of new regulations and ever-expanding compliance requirements.

The problems this scenario illustrates are all too real for many of the nation’s small credit unions. With multiple and complex challenges facing today’s credit unions, it’s no wonder the industry has seen unprecedented contraction in the number of credit unions over the past few decades.

“Since 2000, we have watched the number of credit unions steadily decline,” says Mike Schenk, CUNA’s vice president of economics and statistics and liaison to CUNA’s Small Credit Union Committee. “During that period we lost approximately one credit union per business day.”

According to a Filene Research Institute report, the number of U.S. credit unions has dropped precipitously since its 1969 high of nearly 24,000. After more than 13,000 mergers and a much smaller number of liquidations in the decades since, only about 6,300 credit unions remain today. 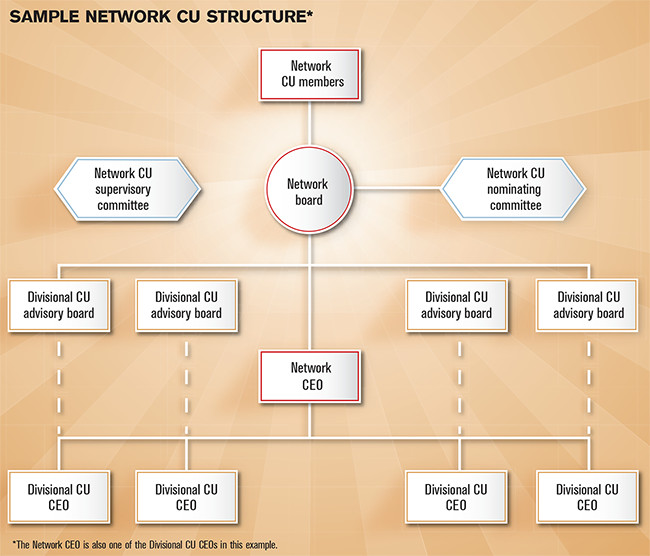 One idea is being heralded as a much-needed option. More than a decade in the making, the “network credit union” allows credit unions to achieve the benefits of collaboration, economies of scale, and diversification without giving up their unique brand identity and local market presence.

Just as important, the architects of the network credit union framework took pains to ensure it fits comfortably within the existing Federal Credit Union Act.

It all started in 2003 when McNichols had a casual conversation with the president of a regional medical center in Indiana. McNichols, head of $413 million asset Hoosier Hills Credit Union in Bedford, Ind., learned the center had just undergone a merger into a statewide network of not-for-profit hospitals.

Impressed by the concept, which allowed member hospitals to keep their original names, volunteer boards, and CEOs, McNichols wondered if a similar structure could be applied to the credit union movement.

Over the next several years, he researched successful collaborative models in other industries and countries, including bank holding companies, the ACE Hardware franchise, and credit union movements in Canada and Brazil.

Canada’s Desjardins financial cooperative provided an early blueprint for the network credit union structure, and top executives in that organization provided substantial input and feedback to McNichols and his colleagues throughout the development process.

“George was the driving force behind the concept,” says John McKenzie, president of the Indiana Credit Union League. “He brought the passion to this project, and his leadership and activity at the league board level was really the driver to move the network idea to where it is today.”

A key development occurred when task force members talked with CUNA’s regulatory advocacy staff, which advised the group to take all the work it had done and ensure it fit within the Federal Credit Union Act, McNichols explains.

“So we went back and simplified the approach significantly and figured out how to keep and provide a voice for the divisional credit unions,” he says. “We structured it so the power rests with the network board, but each divisional board would have an automatic seat on the nominating committee of the net- work board. In this way, the ability to impact who is on the board comes from the nominating committee.”

NEXT: A new approach