CUs stockpile supplies for needy students

That relationship continues at the outset of the school year, when credit unions reach out to the community to collect supplies for kids in need. 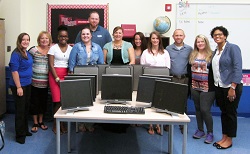 Credit unions nationwide have collected backpacks, school supplies and even computers in recent weeks to help both teachers and kids in the community enter new classrooms fully prepared for the school year.

In Greenbelt, Md., for example, Educational Systems FCU donated 60 backpacks stocked with notebooks, rulers and pencils to needy students in Frederick County. The credit union also granted a student who graduated from a local high school last year $3,000 to put towards her college tuition this fall.

"For us, it's an honor to support education. It's who we are and what we do," said Chris Conway, Educational Systems president/CEO. "Middle school is a crucial time in a student's career. We believe that providing backpacks to middle school students will reinforce the importance of having the necessary tools and supplies for a successful new school year."

Altura CU, Riverside, Calif., donated $900 worth of backpacks and school supplies to local children in need.

In Jacksonville, Ark., Arkansas FCU has both students and teachers in mind this year. The credit union donated eight computers to the Jacksonville Lighthouse Charter School Flightline Upper Academy earlier this month, which will allow each content teacher to have a classroom computer for students to use.

“The credit union has continued to be one of our most dedicated partners in education,” said Evan McGrew, the school’s principal. “(Arkansas FCU) has supported our mission from day one and is truly invested in helping the children of Jacksonville obtain the highest level of education possible.”

America’s Christian CU, Glendora, Calif., once again sent volunteers to the community’s Back to School Bash event, during which volunteers handed out school supplies and backpacks to low-income kids in the Los Angeles area. It was the credit union’s sixth year participating in the event, which provided supplies to between 2,000 and 3,000 students.

Coastal Community FCU, Galveston, Texas, also put on its annual Back to School Bash, an event that has become a big draw in the community, according to the credit union.

The event not only landed roughly 500 students with school supplies, but also kids also received immunization checks and eye screenings.

“Being able to give back to the community and touch people’s lives is such a rewarding experience,” said Carol Gaylord, Coastal Community president/CEO. “It just feels wonderful to make a difference and give families a hand when they need it the most.”

The National Credit Union Foundation, meanwhile, recently held a Back to School Twitter chat to highlight programs initiated by credit unions that positively affect local schools, and to answer questions for those looking to get more involved in that capacity. Check out the foundation’s Storify below.