ALL IN campaign increases CUNA Council membership to 6,600

MADISON, Wis. (9/1/15)--The CUNA Councils’ ALL IN membership campaign generated a 60% increase in the number of credit unions that are members of all six CUNA Councils.

The “ALL IN” campaign aimed to encourage credit unions to join each CUNA Council, which now, thanks to the effort, serve more than 6,600 members. 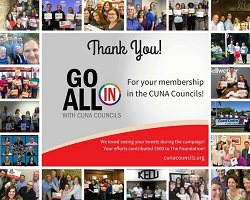 “As a member-driven organization, the council leadership couldn’t be happier with credit unions’ amazing response to the ALL IN campaign,” said Heather Moshier, San Diego County CU executive vice president/chief information officer and chair of the Council Forum. “We look forward to sharing the Councils’ vast network and resources with the hundreds of new members who joined during the campaign.”

Credit unions that became members of all six councils between June 22 and Aug. 21 were also entered to win a CUNA Prize Pack valued at more than $11,000.

The winner of the drawing, Rivermark Community CU, Beaverton, Ore., will receive:

Each time a credit union tweeted a selfie featuring their CUNA Council members using the hashtag #ALLInCouncils, a donation of six dollars was made to the foundation.