LUBBOCK, Texas, and HARRISBURG, Pa. (9/3/15)--Before heading back to Washington, D.C., for Congress’ fall session, U.S. lawmakers nationwide are taking time to meet with credit union leaders in their respective states.

CUNA has encouraged all credit union leaders to meet with their federal representatives when they return home for summer recess. 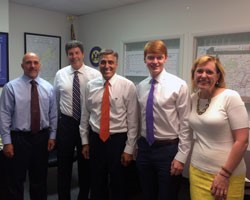 Neugebauer has shown ardent support for the credit union movement recently, spearheading the introduction of a credit union parity bill amending the Federal Home Loan Bank (FHLB) Act that would ensure FHLB eligibility requirements are the same for like-sized credit unions and banks, among other efforts.

The Pennsylvania Credit Union Association continues to encourage credit unions to reach out to members of Congress to ask them to support the four bills.