During his visit, Smith addressed attendees and spoke about the upcoming debate Congress will have on the Iran nuclear deal; a recently approved federal trade bill; and the importance of global trade for Nebraska companies and farmers (The Affiliate Sept. 15). 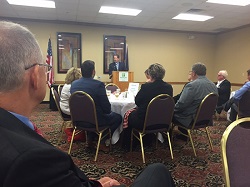 Those in attendance also used the opportunity to urge Smith to continue supporting the preservation of the credit union not-for-profit tax status. Smith is a member of the Ways and Means Committee, which oversees the tax code.

Furthermore, credit union leaders stressed that the costs associated with merchant data breaches continue to mount, and that Congress must pass legislation that would hold merchants to the same data security standards that are imposed upon financial institutions.

Finally, the group discussed overdraft protection programs (ODP) and how consumers benefit from their availability.

Many in the room noted that the Consumer Financial Protection Bureau may soon release a new rule limiting ODPs, which would hurt consumers by either forcing them to rely on payday lenders or by racking up fees for overdrawing their accounts.

The day before the luncheon, Smith also met with leaders from Kearney (Neb.) FCU; Archer Cooperative CU, Central City, Neb.; and the league.