Member Benefits
Learn more
Learn more about the benefits of membership.
Home » Community CUs: CUNA can do even more, with member CUs' help
CU System

Community CUs: CUNA can do even more, with member CUs' help

While CUNA has engineered a number of wins on both legislative and regulatory fronts recently, CUNA can still push the envelope in terms of representing credit union interests in Washington, D.C., Donovan said during the afternoon general session, “Who will speak for credit unions?”

But the trade association’s success hinges on member engagement, he said.

Two of the most influential lobbying groups on Capitol Hill, the National Rifle Association and the American Association of Retired Persons, have 4.5 million members and 37 million members respectively and both possess powerful member engagement. With 103 million members, the credit union movement has the foundation it needs to create real change, Donovan said.

“We’ve got what we need, we’ve just got to use it,” Donovan said. “We have a foundation that’s based upon credit union members. We will win or lose every inch depending on how we use that foundation.” 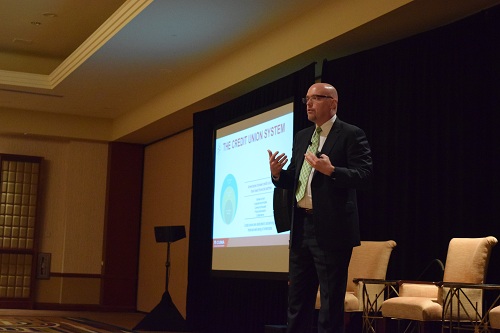 That’s why Donovan believes CUNA’s Membership Activation Program (MAP), a turn-key program credit unions nationwide can use to engage with their members and educate them about the issues theindustry is facing, is so vital.

“This is perhaps the most direct way you can support credit union advocacy efforts,” Donovan said. “… If those that are most invested in the success of credit unions aren’t asked to speak up for credit union, then who will?”

During the conference’s opening general session Wednesday, Cathie Mahon, president/CEO of the National Federation of Community Development Credit Unions, which is co-hosting the conference, announced the launch of the federation’s loan funding program.

With a $10 million investment from Bank of America, Mahon said the federation plans to roll out an amortizing secondary capital loan fund. The fund will provide credit unions a new form of capital that will bolster the work they do in their communities, especially those that are underserved, Mahon said.

“The recipients are going to be using these funds to help them move into new markets and deliver high impact products and services,” Mahon said.

“The neat part about secondary capital it its leveragability,” Letendre said. “Every dollar of secondary capital leveraged by CDFI credit unions brings $10 in loans to families and businesses in low-income communities. The impact is phenomenal.”

Added Letendre: “And so a $10 million secondary capital investment for us is the same equivalent as a $100 million loan to the CDFI loan fund in its impact.”