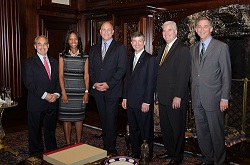 The reception was for U.S. Reps. Bruce Poliquin of Maine, Mia Love of Utah, Tom Emmer of Minnesota, and French Hill of Arizona.

During the event, Hensarling noted the adverse impact of the Dodd-Frank Act on community-based financial institutions, adding that the U.S. loses on average one community bank or credit union a day.

Hill is co-sponsor of the Community Financial Institutions Exemption Act (H.R. 3048). The bill, introduced by Rep. Roger Williams (R-Texas), would exempt credit unions and community banks with less than $10 billion in assets from all Consumer Financial Protection Bureau (CFPB) rules and regulations it puts forth unless CFPB makes an affirmative finding that the proposed rules and regulations need to be imposed on small institutions.

Hill also introduced The Homebuyer’s Assistance Act (H.R. 3192), which would provide lenders a temporary safe harbor--through Feb. 1, 2016--from liability and enforcement of integrated disclosure requirements for mortgage loan transactions under the Truth in Lending Act/Real Estate Procedures Act through Feb. 1, 2016.

CUNA and the leagues have supported both bills.