PHOENIX (9/25/15)--No one could talk about much else in the moments after the keynote address Martin Eakes, president/CEO, Self-Help CU, Durham, N.C., gave to attendees of the CUNA Community Credit Union and Growth Conference Thursday.

To illustrate why he’s made it his life work to help the poor--through his credit union and through other efforts--Eakes shared the stirring and heart-wrenching story of losing a high school friend to murder--an African American friend whose courage in a time of discrimination and hatred was inspiring to him. 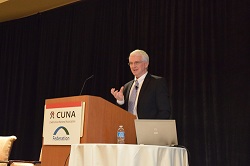 Eakes led off Thursday’s opening general session at the conference, which is being held in conjunction with the annual meeting of the National Federation of Community Development Credit Unions.

Currently, more than 6,000 credit unions operate in the United States, Eakes said. In the next 20 years, he predicted, that number will drop to less than 4,000. Further, he continued, 90% of members and assets will be controlled by credit unions with more than $500 million in assets in today’s dollars.

According to Eakes, if small credit unions want to survive, they must: