WASHINGTON (9/30/15)--The average interest rate for conventional purchase-money mortgages fell in August, according to numbers released Tuesday by the Federal Housing Finance Agency.

The national average contract mortgage rate for the purchase of a previously occupied home dropped to 3.99% for loans closed in August, down 3 basis points from 4.02% in July. 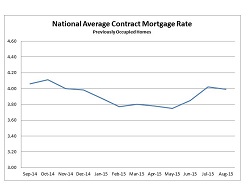