Duda made the visit to the 39-year-old credit union before attending this week’s United Nations General Assembly in New York. PSFCU is the largest ethnic federal credit union in the U.S. 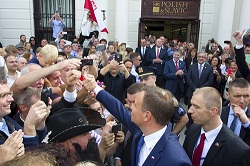 CLICK TO ENLARGE Poland President Andrzej Duda shakes the hands of hundreds of Greenpoint residents outside the Polish and Slavic FCU in Brooklyn, New York. Duda was in town for the United Nations General Assembly this week. He toured the original branch of the nation’s largest ethnic credit union. (Photo provided by Polish and Slavic FCU)

“Thanks to you, many Poles have achieved success in life here in the United States,” said Duda, in addressing PSFCU’s board, supervisory committee, managers and employees. “Today I have asked for your solidarity, so that people who have achieved this success in the past and present are sensitive to those who have not been successful. Help them and reach out to them,” he urged.

Duda is the second Polish head of state to visit the credit union’s Brooklyn operations. Six years ago President Lech Kaczynski and his wife visited the headquarters a few blocks from the original branch. PSFCU is the largest Polish financial institution outside of Poland.

Duda presented a commemorative plaque to PSFCU CEO Bogdan Chmielewski and said he hoped that “as many young people obtain an opportunity from you, which will allow them to show their mettle and demonstrate how industrious and enterprising a nation we are.”

After the tour, Duda spent several minutes outside the branch, talking with and shaking hands of hundreds of Greenpoint residents.

PSFCU was founded by community activists and Rev. Longin Tolczyk, a priest from the Podlasie region, to help Polish people arriving from behind the Iron Curtain to achieve their American dream, Chmielewski told Duda. Today it has 16 branches in New York, New Jersey and Illinois, with more than 84,000 members and more than $1.6 billion in assets.