NAPERVILLE, Ill., and LEBANON, Ore. (10/5/15)--When a local retailer went out of business and stopped hosting a  thrift store school supply shopping spree for underprivileged students in west-central Oregon, Linn-Co FCU, stepped in to help.

The Lebanon, Ore.-based credit union became one of the leaders in sponsoring KidzShop, which collectively provided 315 students this year with a school supply shopping spree valued at $37,000. It teamed with other area community leaders and the Altrusa Club of Albany, Ore., to create KidzShop. 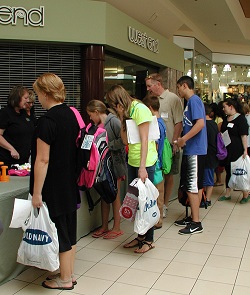 Staff at Linn-Co FCU, Lebanon, Ore., assist underprivileged students on the hunt for clothing, shoes, accessories and school supplies at a KidzShop event so students can start the school year on a positive note. The credit union and others stepped in after a local retailer stopped sponsoring the event. (LSC Photo)

The credit union and other organizations assembled at 6 a.m. one Saturday at Heritage Mall, where students and their adult chaperones shopped for clothing, shoes, accessories and other items.  Each student could spend up to $100.

“KidzShop has truly been a win-win opportunity for the underprivileged children in our community and the credit union movement,” said Kathleen Burt, Linn-Co FCU director of public relations. She noted that LSC “maximized our funds, and all went directly to the kids.”