Minnesota CUs meet with NCUA’s Metsger 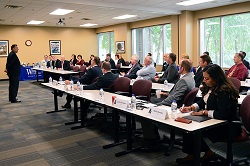 Metsger encouraged credit unions to understand the risks these issues bring to their balance sheets and then to manage those risks. “The most important letter in CAMEL is ‘M,’” he said.

NCUA hopes to have a final MBL regulation issued within the next three months, Metsger told attendees. He also shared thoughts on how NCUA’s FOM initiative may evolve. He noted he would like changes to include providing federally chartered credit unions “multiple (FOM) options to accomplish what you want to do with your strategic plan.”

In discussing NCUA’s budget, Metsger noted efforts the agency has taken to improve efficiencies and use technology to make things easier for examiners and credit unions. He encouraged credit unions to review the budget online and make suggestions and recommendations.

He also urged them to engage in a future dialogue with the agency, noting that credit unions’ comments on risk-based capital “do make a huge difference.”