Happy to Swim in the Deep End

AMANDA CARROZZA is a long-time member of the credit union universe. In high school, she started working at $63 million asset Eagle One Federal Credit Union in Philadelphia part time as a summer intern and during holidays.

When she was hired full time in 2008, she was the youngest staff member by 10 years. Her comparative youth made her wonder what the credit union was doing to prepare for the impending spate of retirements among its baby boomer executives and other personnel. 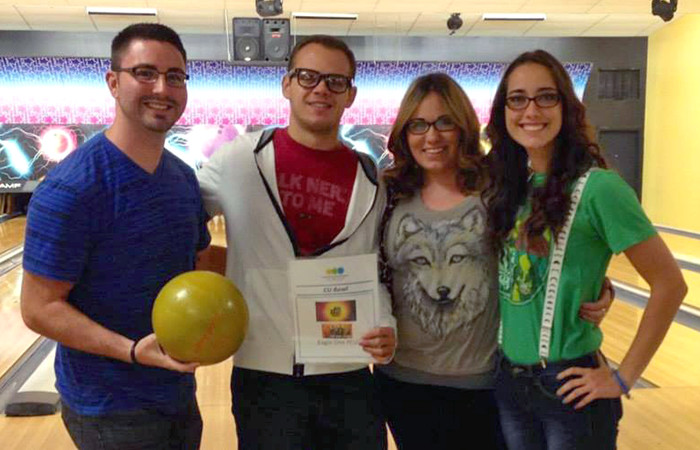 Amanda Carrozza (right) and her co-workers dress up as characters from the TV show "The Big Bang Theory" for a young professional's bowling night, hosted by the Delaware CU League and Young Professionals Network.

After gaining some experience at Eagle One Federal, her first approach to preparing for the future was to acquaint a recently hired young man, new to credit union culture, with more than just his own specific—and narrow—job tasks.

“I talked to him about back-office operations so he’d get a complete picture of how the credit union movement works. One thing he really liked was learning about credit unions’ nonprofit nature. He’s been here six years now, and it’s nice to see him flourish.”

She says the credit union movement must recruit younger people to ensure its survival. “I don’t follow a set procedure in acquainting young new employees with the industry. But within the first six months that they’re here, I make sure they attend conferences and community events, as well as receive outside training.”

Given her expertise recruiting young people to join the industry, it’s no surprise Carrozza heads up Eagle One Federal’s human resource (HR) department.

She shares her message outside of her day job, too. “I conduct a lot of presentations on how to reach Gen Yers and what they expect from the credit union experience.”

Carrozza is trying to become a better speaker, a task she approaches by forcing herself to go onstage to give speeches.

She admits her approach is much like the non-swimmer who deliberately jumps into the deep end of a pool to teach herself how to swim.

HR skills aside, Amanda estimates that 60% to 70% of her job consists of helping Eagle One Federal swim safely through the vast sea of government regulations. “I’m a nerd—I like compliance! I’m good at processing and analyzing text because I love to read, preferably about something new.”

Although she completed a master’s degree in osteopathic medicine in 2013, which would have entitled her to counsel or lecture, Amanda decided the credit union industry is where her heart has found its home.