'The app brings the whole hospital experience down to a fun and human scale.'

PLAYING VIDEO GAMES in high school, fiddling with their software innards, and changing the look of the games led Marian Perez to a career in graphic design.

From playing with “The Sims” as a high schooler, Perez’s career came full circle when she led a team at the $639 million asset University of Michigan Credit Union (UMCU). The team designed an entertaining mobile game app for kids waiting to be treated at the C.S. Mott Children’s Hospital in Ann Arbor, Mich. 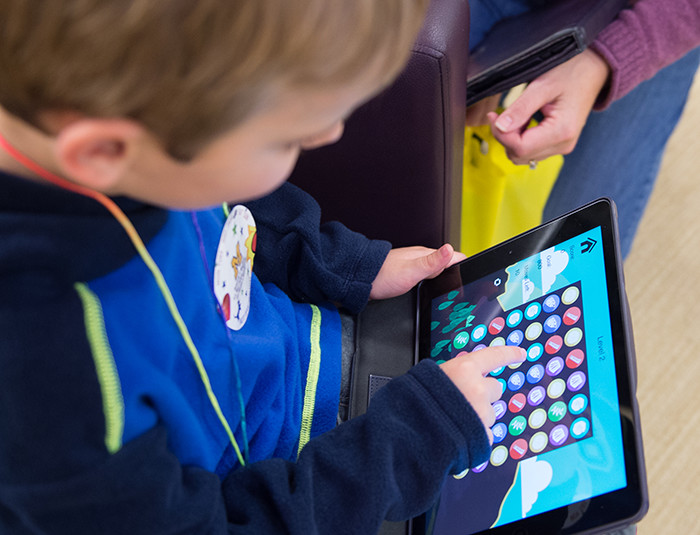 A boy plays "Fossil Mania" inside the Foozel app, a game similar to "Candy Crush," during the app's launch party at the C.S. Mott Children’s Hospital.

“We were targeting kids waiting to be seen who were scared or hospitalized. I thought, ‘How cool is this?’ ” says Perez, a graphic designer at UMCU and a 2012 graduate of the University of Michigan’s School of Art and Design. “After months of development, we tested it with some children at Ann Arbor Hands-On Museum. I was scared they would be bored, but they loved it.”

The app—called Foozel—serves as part of the credit union’s three-year, $342,000 pledge to benefit the children’s hospital and Von Voigtlander Women’s Hospital.

Developers based the app—a suite of four children’s games—on fossils, because the credit union contributed to installation costs for the “Ancient Arb I” bronze, mother of pearl, and terrazzo fossil floor in the hospital’s main entrance.

In the app, the floor breaks away and children begin a prehistoric adventure that eventually leads them back to the present. The app launched in November 2014 with a cupcake party for children at the hospital.

“The app brings the whole hospital experience down to a fun and human scale. It’s crazy to see how popular it has become,” Perez says. “Supporting the hospital shows we really care. It proves we’re part of the community and we’re not going away.”

Perez garnered local media attention for the app, and praised the credit union as a strong community partner.

“Marian is a great asset to our team,” says Julie Wigley, UMCU’s vice president of human resources and talent management. “Her strong creative talent—as demonstrated by the app—along with her commitment to the brand and ties to the university are a perfect match for us. We’re thrilled to have her on our team!”