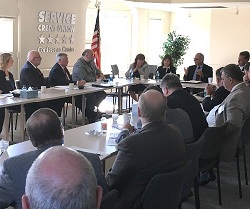 Black noted that the state’s credit unions had a 94% loan-to-share ratio, driven partly by a 31% increase in indirect auto lending, which totaled $1.6 billion as of June. Credit unions must understand how they price indirect loans to ensure the portfolio performs positively, she said.

Black also said that interest-rate-risk and cybersecurity are core issues of concern for credit unions and urged them to understand the Federal Financial Institutions Examination Council’s new cybersecurity tool.

The state regulators provided updates about the department, upcoming regulations, and implementation of a recent recodification of the state banking and credit union laws, and they received input about national regulatory issues facing credit unions, CCUA said.

Perlow emphasized the excellent health of the state’s credit unions, which have the lowest delinquency ratio in the nation and have grown membership at an annualized 4%. He also said the department strongly supports more transparency in how NCUA sets the Overhead Transfer Rate and supports a more extended examination cycle, a proposal that CCUA has advocated with NCUA.

White told credit unions to expect regulations implementing the state recodification bill to start being released to the industry in the coming weeks.