In his annual Amplify president’s address Thursday morning, Stang discussed what success looks like for credit union members: giving members the relevant products and services they need to achieve their dreams (Anthem Oct. 8). 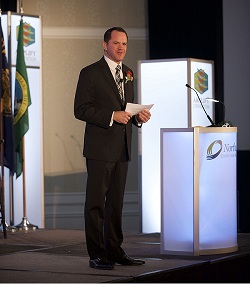 Early credit unions were not authorized to offer mortgages or checking accounts, and their deposits were not insured, he said. “The reason credit unions don’t still look like that is because over time they came together as a movement to clear away the obstacles to serving their members,” Stang said.

“The whole purpose behind the work of the movement is to give you the tools and freedom you need to serve your members,” he added.

He called on the 166 credit unions affiliated with NWCUA, their 1,800 directors, 166 CEOs and 15,000 employees to engage in credit union advocacy, and to engage their 5.2 million members as advocates.

He also unveiled seven ways Northwest credit unions have exemplified collective action the past year, and noted that 40 years, or even five years, from now, members’ needs will be different.

To keep up with the pace of change, Stang said, “it’s going to take a 5-million-seat strategy in which every credit union, board member, executive and employee join together as advocates of this movement” to bring members, policy makers and the public into the credit union story.