Strong advocacy keeps steady as Maine CUs Hike the Hill

PORTLAND, Maine, and WASHINGTON (10/13/15)--Twenty representatives of Maine credit unions and the Maine Credit Union League were in Washington, D.C., last week for the league’s annual Hike the Hill trip to engage with lawmakers and advocate for credit unions on key legislative and regulative issues.

The visits, which took place Oct. 5-7, also reinforced the high level of involvement and advocacy of Maine’s credit unions with their congressional delegation, said the league. They met with members of Congress who represent the state and who are responsible for financial services issues. They also met with key legislative staff. 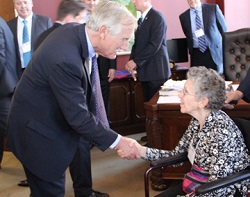 The group provided input on cybersecurity, data breaches, member business lending, and the regulatory burden related to rules and regulations from the National Credit Union Administration and the Consumer Financial Protection Bureau.

“We had some in-depth conversations with our delegation and were able to provide examples and feedback on our concerns and challenges facing credit unions in today’s environment,” said John Murphy, league president.

“We also had the opportunity to relay the positive growth going on at Maine credit unions, especially with membership and loans. Our delegation appreciated hearing the credit union perspective on the local economy in various regions of the state,” Murphy added.

Participants also found another bonus. In addition to discussing important issues with Maine’s delegation, the Hill hike provided a networking opportunity among credit unions from across the state, said Matt Kaubris, president/CEO of Oxford FCU, Mexico, Maine. “I found it helpful to talk and learn about what credit unions in other parts of the state are doing, in terms of managing growth and meeting the needs of our members,” he said.