PORTLAND, Ore. (10/13/15)--With the theme of the Roaring ‘20s, the annual Credit Unions for Kids Gala and Auction met its goal of raising $250,000 for Children’s Miracle Network (CMN) Hospitals in the Northwest.

Credit union professionals, business partners and advocates were dressed in gangster suits and flapper dresses for the event that coincided with the Northwest Credit Union Association’s (NWCUA) Amplify Convention in Portland, Ore. 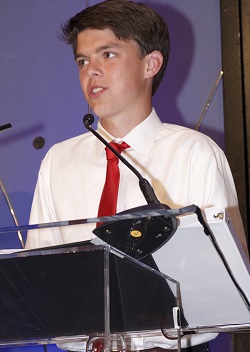 Two years after being treated for acute myeloid leukemia at OHSU Doernbecher Children’s Hospital, 16-year-old Tim Haarmann tells his story of running a marathon to the audience at the Credit Unions for Kids Gala in Portland, Ore. (Northwest Credit Union Association Photo)

Former CMN Hospital patient Tim Haarmann told the audience about his diagnosis of acute myeloid leukemia and his treatment at OHSU Doernbecher Children’s Hospital. While in the hospital two years ago, he set a goal to walk the equivalent of a marathon to build his strength during his stay.

Just days before this year’s gala, Haarmann ran the Portland Marathon with one of his doctors from Doernbecher.

“Without the skilled staff at Doernbecher Hospital I would not be alive right now,” he said (Anthem Oct. 9). “The funds that are raised tonight will make a significant impact on the lives of kids just like me.”

The red Radio Flyer wagon portion of the auction kicked the fundraising spirit up a notch. Traditionally, Northwest credit unions donate a red wagon to each of the six CMN Hospitals in the region. This year, auctioneer Chris Leach had a surprise for the bidders--two wagons were offered for each hospital, nearly doubling the funds raised during that part of the auction.

During the convention’s general session the next day, NWCUA Chief Operating Office Denise Gabel announced that the auction raised $248,721 and asked the audience if anyone would help round it up to $250,000.

Immediately a hand went up, NWCUA reported, making the total funds raised for CMN Hospitals through Credit Unions for Kids an even quarter-million dollars.