“CUNA is proud to celebrate International Credit Union Day and mark the accomplishments of credit unions around the globe,” Nussle said. “It’s important to honor the history of the credit union movement and highlight the good work of our cooperative, not-for-profit financial institutions. The movement has grown to over 217 million members worldwide--and we’re continuing to seek ways to create credit union awareness. 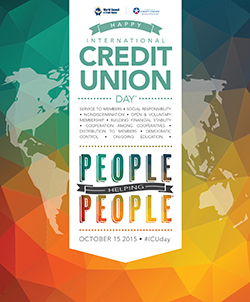 “That’s why I’ve been in Cuba this week as part of the first fully credit union focused group on the ground in Havana since the U.S. government changed their policies in December of last year. I’m honored to have been given the opportunity to discuss the credit union movement there, and am reminded of the important work we’re doing back home. Here in the United States we have over 104 million memberships and are continuing to grow."

Definitive moves in the potential establishment of Cuba’s first member-owned financial cooperatives are still some months off. Credit unions' viability will be determined not only by an increased receptivity and application by Cuba's banking and government sectors, but also through continued efforts toward the overall normalization of the political relationship between the United States and Cuba, according to findings of a credit union study group that visited the island this week as part of the celebration of ICU Day.

Credit unions have the capacity to serve the Cuban people, especially in rural areas, said Brian Branch, president/CEO, World Council of Credit Unions. "Our mission is one of ‘people helping people,' and when the time is right, the global movement will be ready to lend the technical assistance necessary if Cuba decides to move in that direction," Branch said.

In fact, “People Helping People” is the mission of this year’s ICU Day. It is a theme that credit unions are sure to embrace in Cuba as they have around the world for decades.

And just as credit unions serve their members in countless ways, they will mark ICU Day with similar creativity.

Click image to enlarge. A representative from Meritrust CU gives away a tank of gas during the Kansas Credit Union Association’s 2014 Make a Difference event on ICU Day (Meritrust CU Photo)

The Kansas Credit Union Association and 20 Kansas credit unions will conduct the seventh annual Make a Difference event, during which credit union representatives will surprise residents with more than $17,600 worth of giveaways statewide. Past giveaways have included gas, cash and gift card “it’s on us” events, where credit unions pick up the tab at local restaurants.

In Pennsylvania, White Rose CU, York, is asking members to visit its branches to pick up bags of canned goods to be delivered someone in need--anyone in need of a kind gesture. Members are welcome to add to the bags or include their own acts of kindness. To focus on the celebration theme, the credit union is also distributing “A Manifesto for Kindness” brochure.

Kellogg Community FCU, Battle Creek, Mich., invites its members and the community to stop by any of its branch locations for refreshments, drawings and giveaways to celebrate ICU Day.

In Georgia, Gov. Nathan Deal has declared Oct. 15 as Credit Union Day. Georgia Credit Union Affiliates (GCUA) is promoting credit unions all month long with a “Switch to Save” promotional campaign aimed at Georgia consumers. Among the credit unions taking part in the campaign are Augusta VAH FCU, which is featuring a “Swap and Drop” loan promotion.

Reliant FCU, Casper, Wyo., will purchase beverages at coffee shops near each of its branches.