The report, The Economic Contribution of Iowa’s Credit Unions, is authored by Iowa State University economist Dave Swenson. It analyzed the state’s credit union industry, which in 2014 comprised 3,274 employees, $185 million in payroll and benefits, and $620 million total income. 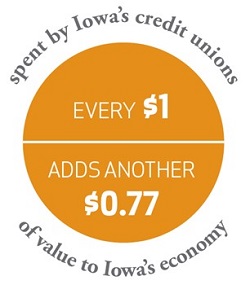 These direct values, combined with Iowa credit unions’ use of local utilities, their services to operate facilities and credit union employees’ spending in local communities, create a multiplier effect that supports even more jobs in Iowa, said the report.

“As a longtime member of a credit union, I am grateful for the services they provide to their members and the Iowa economy as a whole,” said Branstad.  “I recognize the value credit unions bring in creating and sustaining jobs in our state.”

His proclamation recognizes the Iowa credit unions for their continuing advancement of the financial well-being of their members and the contributions made to their respective communities.

Patrick S. Jury, league president/CEO, said, “Iowa’s credit unions have contributed significantly to the state’s economy. However, while the more than $1 billion economic contribution is impressive, it is only a piece of the overall impact Iowa’s local, not-for-profit, member-owned credit unions have had on improving the financial lives of consumers, which is why credit unions are proud to celebrate International Credit Union Day in Iowa today.”