COLUMBUS, Ga. (10/19/15)--Debit cards continue to be at the top of consumers’ wallets for payments, but alternative methods are gaining on them, according to the fifth annual U.S. Consumer Payment Choice Study from TSYS. 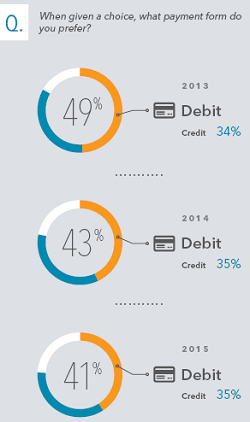 Preference for debit dropped to 41% from 43% compared with 2014 findings, while credit remained stable at 35%. TSYS found online methods such as PayPal and even traditional cash have cut into debit usage.

The report noted that overall consumers prefer to use debit when making everyday purchases, credit when shopping online or making discretionary purchases, and cash when making small-dollar payments.