NEW ORLEANS (10/19/15)--The credit union industry in Louisiana has grown significantly, serving as an expanding financial sector and contributing to the state’s economy, according to a new economic impact study.

Membership in the state increased 56% since 1991 to 1.2 million members, and Louisiana’s 200 individual credit unions passed the $10 billion-asset mark for the first time, said the report, "The Economic Impact of Credit Unions on the Louisiana Economy." The report was conducted by economist Loren Scott for the Louisiana Credit Union League. 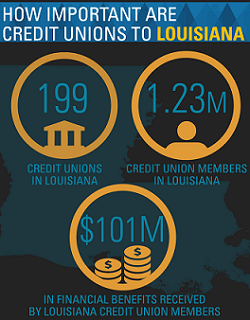 "Loan volume is [an] indicator that credit unions are a healthy, growth sector in the state,” Scott said. “Loan volume has demonstrated a solid growth path over the past 24 years without a single year of decline. In addition to providing very helpful, competitive financial services for its members, credit unions are significant job and earnings generators in the state as well," Scott said.

"In many ways, credit unions are the communities they serve, and this analysis underscores the size and impact of the credit union movement on the Louisiana economy," said Anne Cochran, league president/CEO. "Credit unions are creating stronger financial foundations for more than 1.2 million Louisianians, and Dr. Scott's analysis proves credit unions are fulfilling the role for which they were created."

The credit union movement is an economic driver for the state, supporting more than 3,600 jobs statewide and generating $204.3 million in credit union worker compensation in 2014 alone.

With the growth, Louisiana credit union employee wages rose steadily. While a 5% wage gap existed between credit union workers and the average Louisiana worker 24 years ago, that gap widened to 26.5% as of 2014.