Member Benefits
Learn more
Learn more about the benefits of membership.
Home » KCUA, CUs charm community with ‘It’s On Us’ on ICU Day
CU System

KCUA, CUs charm community with ‘It’s On Us’ on ICU Day

WICHITA, Kan. (10/26/15)--Kansas credit unions and the Kansas Credit Union Association (KCUA) injected good will in communities statewide by picking up tabs worth $17,600 during the “It’s On Us” event.

Part of the Make a Difference campaign, “It’s On Us” was held Oct. 15 on International Credit Union Day. The events help spread the “people helping people” philosophy, raise the awareness of the credit union difference and support local small businesses. 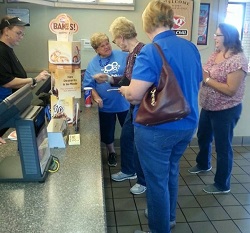 Stories from the day included an elderly man who walked into MeMa’s Bakery, Kansas City, to purchase treats for the nurses who helped his late wife, according to a KCUA’s newsletter, Vision (Oct. 20).

“I told him we'd like to pick up the cost of his order and he burst into tears,” Teresa Spear, vice president of human resources operations, Midwest Regional CU, Kansas City, told Vision. “He told me that I probably didn't want to do that, he was purchasing the tray to take to the hospital to give to the nurses that took such good care of his wife that had just passed away. I told him if there was anybody that this day was for, it was him.”

Some recipients were initially skeptical, Vision reported, but most were pleasantly surprised and some paid it forward even more.

In Wichita, a free lunch provided the opportunity for Monica Young, Wichita FCU, and Dustin Nolan, Credit Union of America, to explain the credit union difference. The recipient inquired about credit unions, and “she was very surprised to know that our board members and members control the credit union," said Young.

KCUA added a Children’s Miracle Network (CMN) Hospitals fundraiser to the Make a Difference event. Based on the number of social media posts using the hashtag #theCUwayKS, and with a matched donation from the league, $348 was donated to Kansas CMN Hospitals.