LOS ANGELES (10/28/15)--A Los Angeles-based credit union has rolled out an innovative payday loan consolidation product that not only can wrest borrowers from the grasp of predatory lenders, but that also makes financial sense for the credit union.

Nix Neighborhood Lending--a subsidiary of Kinecta FCU with deep roots in some of Los Angeles’ most impoverished minority communities--has devised a sustainable solution to the debt woes of thousands of residents.

With the Payday Payoff Loan, borrowers can walk into any of Nix’s 33 locations with up to $2,500 in debt and have it consolidated into one manageable installment loan.

The loans carry an interest rate of 18% with a 24-month term, and an application fee of $49.95. To help ensure repayment, the credit union has structured the product so that payment due dates coincide with a borrower’s paycheck. While not mandatory, 95% of all borrowers opt for automatic payments on payroll dates because of the convenience, according to Nix.

The result? Since Nix began offering the loan in 2014 as part of a pilot program supported by the Center for Financial Services Innovation (CFSI) and the MetLife Foundation, the credit union has seen a net charge-off rate of only 5%.

Only those who have felt the relief the product has provided can describe what the service has meant.

“I didn’t have any other options,” one borrower said in a report from CFSI on the project. “I would have had to keep flipping those other loans until I could afford to pay them off.” 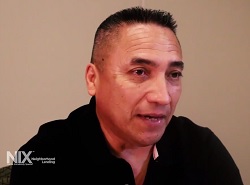 A Nix borrower and Kinecta FCU member who has been greatly helped by the Payday Payoff Loan. (Nix Neighborhood Lending Photo)

“Nobody has that type of loan (in Los Angeles), to my knowledge,” one member said in a video testimonial from Nix. “It’s the best short-term loan that you can find out there, and I’ve checked. Trust me, I’ve looked (everywhere).”

But developing a loan product that bolstered those in financial ruin, but also made financial sense was a tricky proposition.

Luis Peralta, Nix president, told News Now that the overwhelming majority of its borrowers have either highly damaged or no credit, essentially making traditional underwriting models worthless with regards to assessing their ability to repay the loans.

Instead, when developing the product, which remains the only one of its kind, Nix partnered with LexisNexis Risk Solutions to develop an underwriting model from scratch that used alternative data to determine whether a borrower could repay the loan.

Peralta said that, despite relying on nontraditional data, Nix’s underwriting model adequately determines whether the borrower can repay.

“The biggest challenge is to really come up with the underwriting model that will ensure a healthy portfolio,” Peralta said. He added that it was imperative to have all costs at a manageable level “so we could scale and sustain the offering of these types of loans.”

At the outset, to ensure the product they created was sustainable, Nix and Kinecta tracked the costs for origination, acquisition, servicing/processing and loan losses.

A year and a half later, Nix has found the right balance for the terms it offers with the loans and--also thanks to a clear and expedited application process--the program continues to grow.

Thus far, the credit union has made 7,500 individual loans that have consolidated nearly 28,000 payday loans worth more than $8.5 million.

The Payday Payoff Loan has proven so successful that Kinecta is considering plans to offer it from all Kinecta locations, not just from Nix Neighborhood Loan storefronts. It also has started allowing borrowers to fold other types of high-cost debt into the loan to help get them back on the right financial path.

“Although we have done a decent job so far, there’s still a lot more to do, and that’s just in Los Angeles,” Peralta said.