ONTARIO, Calf. (11/4/15)--Thanks to the generosity of credit unions and credit union-related organizations nationwide, as well as the local community, businesses and individuals, more than $3 million has been raised to assist affected residents and firefighters in Middletown, Calif., and the surrounding Lake County areas devastated by recent wildfires.

In September, the California and Nevada Credit Union Leagues and Firefighters First CU, Los Angeles, issued a challenge to help raise money to assist those affected by the devastating wildfires. 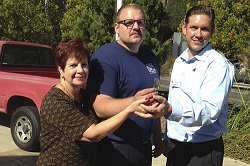 A firefighter holds up what's left of his helmet, destroyed in the recent fires in Northern California. (California and Nevada Credit Union Leagues Photo)

The Middletown Relief Fund, established by Fire Family Foundation (the charitable arm of Firefighters First CU), in conjunction with the leagues, has raised more than $122,000. It is working with Mendo Lake CU and Redwood CU to disburse the funds to pay bills not distribute cash. In addition, the foundation has committed $1,000 apiece to each of the 33 firefighters who lost their homes while out doing their jobs. Each firefighter will be “adopted” by another fire department.

The Lake County Wildfire Relief Fund has raised roughly $1.3 million with nearly $1.2 million distributed so far. Redwood CU also made a donation to the fund (from its contributions), and that money was used to distribute gift cards totaling $79,200.

The fund has distributed more than $739,000 to provide immediate support to victims and relief efforts, including $74,400 in gift cards to 372 Lake County students, teachers, and school staff to replace school clothes and supplies, according to Traci Thylin Bocci, Redwood CU communications and public relations assistant manager.

Nearly $40,000 was given to Lake County first responders, including firefighters and sheriff office employees who lost their homes while protecting the community, and another $100,000 in animal support through the Lake County Farm Bureau to provide materials to replace pens or homes for displaced animals and livestock.