FORT LAUDERDALE, Fla. (11/18/15)--Hard up for money in her native Hungary, Timea Nagy decided in 1998 to take a job offer in Canada that seemed like a great deal. But that deal quickly turned into a nightmare as upon arrival Nagy was forced into sex slavery for 3 1/2 months before she escaped.

During that time she endured starvation, abuse and threats to herself and her family. Now Nagy speaks of her ordeal around the world and helps law enforcement in their efforts to track and fight human trafficking.

“I believe the first step is for us to recognize what human trafficking really is. Education will let us look beneath the surface and see what’s going on,” she said. “I am super inspired by conferences like this, because I see 350 of you here, that’s 350 people who will go back and tell your colleagues what you learned, then they tell somebody else, and now we’re growing an army to fight this.”

Nagy’s presentation was sponsored by Verafin, which offers software designed for financial institutions to pick up on the red flags of human trafficking.

After years of self-loathing, fear, depression and “searching for my soul,” Nagy connected with Verafin. During that meeting, Verafin staff took Nagy into an office and asked her to examine an account that had an alert for human trafficking. 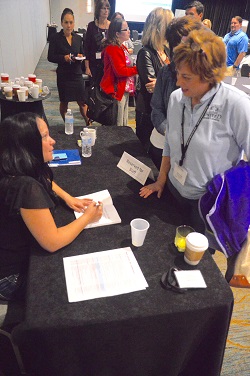 “It took me five minutes to realize this person is a human trafficker. He had just purchased seven ads on Backpage [an online classified advertising site that is frequently used to advertise escorts], and he rented hotel rooms and rentals cars, and I knew in that moment and said ‘this guy’s a trafficker,’” Nagy said. “We looked up the victims on Backpage, and I said ‘I can identify three of them right now.’”

Since then, Nagy has worked with law enforcement to try and bring down these human trafficking rings.

Brendan Brothers, director of product marketing and co-founder of Verafin, said that the software looks at things like the age of the account holder, purchases on sites like Craigslist and Backpage, multiple purchases at lingerie and adult stores and multiple hotel room rentals--all considered red flags.

“Everyone here should think of themselves as not just compliance officers, but crime fighters,” Brothers said. “Human traffickers in the U.S. see $3.1 billion in profits every year, and that’s going into financial institutions. Hopefully this presentation makes you excited to go into work every morning, so you can help prevent what happened to Timea.”

Nagy said over the last few years of working with law enforcement on behalf of victims, it’s becoming increasingly clear that financial institutions have the most crucial role to play in combating human trafficking because the business is all about greed and money, money that has to go somewhere.