Matz remained steadfast in her position that moving to an 18-month exam period next year at the same time as many of the agency’s regulatory relief proposals become effective would be an irresponsible approach. 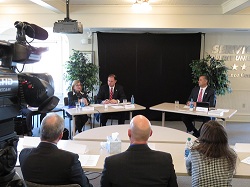 Guinta questioned whether the NCUA has the flexibility to consider some type of collaboration with New Hampshire credit unions, who are performing so well, to test out a longer examination period.

Matz noted that it is a sensible idea to have some type of pilot program in a state like New Hampshire, particular as the 18-month idea was raised the CCUA, and expressed a willingness to continue a more focused dialogue and potentially implement such a program in the future.

CCUA President/CEO Paul Gentile noted that such dialogue should consider possible triggering events that would either preclude or allow certain credit unions to be examined on an 18-month period.

Multiple credit union representatives stated that due to their safe and low-risk activities, and to the increasing burden of the 12-month period, they would be low-risk, useful candidates for a potential pilot-type program to test the implementation of an 18-month exam period. Three credit unions noted that in their recent examination cycle, the examiners remained in their institutions for a month.

"I want to thank the congressman and Chairman Matz for spending the time to dialogue with New Hampshire credit unions about issues that are so vital to how they serve their members," said Gentile. "I was thrilled with the congressman's idea on an 18-month pilot program and for the chairman's willingness to dialogue further on how an extended exam cycle dialogue could begin and be used to find a path to extended cycles."

Gentile also noted that the credit union community is pleased that NCUA has released a proposed field-of-membership regulation. The ability for congressional districts to be considered well-defined local communities, and the addition of service facility to include a transactional website are welcomed provision, he said, noting that the association plans to provide substantive comments on the rule.