Brenda Davis, founder of BBC Opportunity Center, an Old Town, Maine-based homeless and hunger resource agency, once again partnered with the state's credit unions to raise awareness about the severity of hunger in Maine. 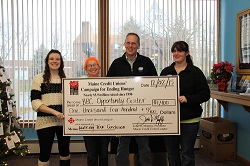 Click image to enlarge. Brenda Davis, one of Maine’s leading hunger-relief advocates, second from left, is joined by representatives from Brewer FCU at the final stop of the 2015 Maine Credit Unions’ Ending Hunger Walking Tour. The 14th annual walk was the largest ever, as it visited 93 credit union branches in 87 communities. (Maine Credit Union League Photo)

The walk concluded with a contribution from the Maine Credit Union’s Campaign for Ending Hunger for $1,400--commemorating the walk’s 14th year--which is just a portion of the record-breaking $552,257 that was raised in 2014 campaign. In all, the Maine Credit Unions’ Campaign for Ending Hunger contributed nearly $30,000 to help end hunger through the tour.

Since starting her walk Oct. 23 at Maine State CU, Augusta, Davis walked more than 700 miles visiting all 16 Maine counties and a record-setting 87 communities. Since 1990, the Maine Credit Unions' Campaign for Ending Hunger has raised $5.9 million to help end hunger in Maine.

At each of the 93 credit union branches Davis visited, she received a contribution from the campaign as a way to support her cause.