The event was part of the nonpartisan “Strong Credit Unions, Strong Middle Class.” campaign, which aims to educate all candidates, regardless of political affiliation, about the positive role credit unions play in the economic lives of the middle class. More than 150 people from the Lowcountry attended the event, spearheaded by the Carolinas Credit Union League (CCUL) as part of a collaboration with CUNA. 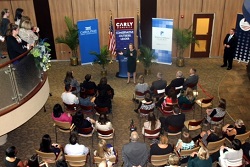 Fiorina--who, along with her husband, belongs to a credit union--is the second presidential contender to make a connection with credit unions.

During the Nov. 14 Democratic debate, Bernie Sanders recognized the importance of credit unions with his comment that they are “the future of banking in America.”

“In this critical time as credit unions seek to better serve members and communities, it is important that we hear directly from our candidates. We truly appreciate Ms. Fiorina visiting credit unions and sharing her time with us,” CCUL President/CEO John Radebaugh said of the event. “Credit unions protect and expand our middle class economy, and because they represent so many people--100 million nationwide--we want all candidates to recognize the issues that matter to our members and that our members are listening.”

Fiorina noted the connection between community financial institutions and the middle class. “When credit unions and community banks go under, who suffers? The middle class,” said Fiorina, the league reported.

She also spoke about the Dodd-Frank Act and responded to questions about data security.

To reinforce the Middle Class campaign’s message, the league is actively pursuing visits by presidential candidates to credit unions prior to South Carolina’s Republican debate in February.

Coverage of Fiorina’s visit was published by MSNBC, US News & World Report, WCBD-TV, WCSC-TV, the Charleston Regional Business Journal and the Aiken Standard.