Member Benefits
Learn more
Learn more about the benefits of membership.
Home » Keeping CUs on right track by defining what is ‘right’: Onsite
CU System

Keeping CUs on right track by defining what is ‘right’: Onsite

LAS VEGAS (12/8/15)--Supervisory committee members have a commitment to make credit unions stronger by keeping them on the right track. The challenge is defining what “right” looks like.

That was the first lesson from consultant Josh Witt to the capacity crowd at the CUNA Supervisory Committee and Internal Audit Conference Monday in Las Vegas. Representatives from more than 180 credit unions are set for a three-day conference on the roles, responsibilities and realities of committee members. 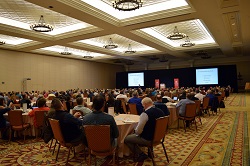 Click to enlarge. It was a full house at Monday's opening general session of the CUNA Supervisory Committee and Internal Audit Conference in Las Vegas. The three-day conference focuses exclusively on supervisory committee and internal audit information, with insights into the unique role committee members play in their credit unions. (CUNA Photo)

But how to do that with challenges such as regulations, compliance, the economy and attracting millennials facing them?

“We have to look at our own DNA,” Witt said. “If we don’t remember who we are, how do we figure out the why of what we’re doing?”

He suggested looking at the past by using a piece of the present--a selfie stick--to determine the future. Taking pictures of yourself reminds you of who you are, your DNA and what you can do, he said.

“It’s nice to be involved,” he told News Now. The supervisory committee fits his background as an auditor, and the role provides good balance between life, work and volunteerism. Dickson added, “I could see myself on the board someday.”

In the meantime, Dickson is now part of a group that Witt defines as one that leads, trains, evaluates and builds morale.

“You set the tone,” Witt said. “You have an excitement about being on the supervisory committee.

“As a volunteer there is nothing better than giving back other than seeing it blossom.”

Register here for next year's conference, set for Dec. 4-7 in Las Vegas.