The gathering, which was the final credit union Hike the Hill event of the year in Washington, offered a valuable opportunity to hear from key Washington players on what to expect in the year ahead, and communicate credit union legislative and regulatory concerns and priorities. 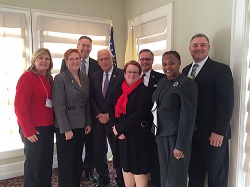 A senior member of the House Ways and Means and Budget committees, Pascrell is a long-time credit union supporter who has been a member business lending (MBL) reform co-sponsor and pledged publicly to support preservation of the credit union tax status.

Serving her first term in Congress, Coleman serves on the Government Reform and Oversight Committee, and recently added her co-sponsorship to MBL reform. While serving in the New Jersey Assembly before her election to Congress last year, she cast votes in favor of two NJCUL legislative initiatives, measures to allow credit unions to become eligible municipal depositories (GUDPA), and to expand the state’s Credit Union Advisory Council (CUAC) to provide for representation of federally chartered credit unions.

Serving his first full term in Congress, Norcross serves on the Budget and Armed Services committees. He cast votes in favor of the GUDPA and CUAC bills while serving in the New Jersey Senate.

“I want to thank our members for taking time from their busy schedules to advocate on behalf of New Jersey credit unions,” Michlig said. “With two keys bills being marked-up by the House Financial Services Committee, these meetings were particularly timely, and important,” he continued.