WASHINGTON (12/16/15)--Mere steps away from Capitol Hill sits one of the strongest assets credit unions have in terms of advocating for the movement and its more than 100 million members.

Credit Union House, its champions say, provides credit union leagues and their members a space in the heart of Washington, D.C., where they can host Congress members to discuss critical issues and hold briefings with CUNA prior to Hike the Hill visits. 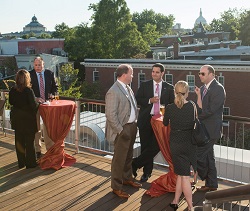 But there’s even more to it than that, according to Sue McCue, CU House director.

In Credit Union House, “we have a physical presence for credit unions day-in and day-out,” McCue told News Now. “Lawmakers who come here leave with a very powerful message. The credit union movement is here to stay. It’s permanent, strong and significant.”

Credit Union House, which opened in 2001, is owned by all statewide trade associations and the American Association of Credit Union Leagues. The facility lies only four blocks from the Capitol steps and consists of several meeting spaces, including the popular third-floor meeting area that connects to a terrace that owns spectacular views of downtown Washington, D.C.

The accommodations have even become popular among lawmakers, as a number of them have rented out the space for non-credit union events. What better way to raise awareness for the movement?

“The facility engenders a really positive association with credit unions,” McCue said. “Something I always strive to do is reflect credit unions in the most positive light. It is our goal that every guest feels welcome. Credit Union House has a warm ‘home away from home,’ atmosphere, and that feeling really carries throughout the experience here.”

But the real value of Credit Union House is in the way it removes barriers by setting the stage for advocacy at all levels.

Dick Ensweiler, president/CEO of the Cornerstone Credit Union League, Credit Union House chairman, and a member of the subcommittee that oversaw construction of the building, said the space provides credit unions the ideal home base when gearing up to meet with lawmakers and regulators.

“Especially for leagues, as we try to do the things that credit unions ask of us in terms of credit union advocacy, going to Credit Union House before meeting with lawmakers really sets the tone for the meetings on the legislative issues we’re going to the Hill for,” Ensweiler told News Now. “And then it’s just a convenient walk to the Hill to get what we need done.”

Ensweiler added that the league will always invite CUNA staff to come and update credit union representatives on important issues and about the current status of bills that advocates should remind their elected officials to support.

And, of course, CU House also serves as an effective setting to host lawmakers to talk about credit unions.

“Credit unions are very much about relationships, and that ties in nicely with Credit Union House,” McCue said. “It’s a great place for credit union advocates to build upon their relationships with lawmakers. They’ll come here with the focus entirely on credit unions, and they get that really fantastic one-on-one time to talk about the issues that are relevant.”

That sentiment doesn’t appear to be lost on many leagues either.

This year, 26 leagues representing 38 states held events at CU House, meeting with more than 80 lawmakers. In all, CU House hosted 111 events, a new record for the facility.

Still, both McCue and Ensweiler said that CU House would love to see more events held by individual credit unions in the coming months. Both said the building would work perfectly for credit union planning sessions and staff retreats.

“CUNA and (the credit union’s) respective league would be happy to put together a program agenda to enhance their experience,” McCue said. “Coming to Washington D.C., really highlights the power and importance of political engagement by our members.”

Added Ensweiler: “It reemphasizes how they can be engaged in the advocacy or legislative process. CUNA can be there, leagues can be there. They get a flavor for all that goes on in Washington just by looking out the window, and I think it helps reignite the commitment they will make to doing their share to see that good legislation is passed.”