WASHINGTON (1/13/16)--Regulatory burden cost credit unions $7.2 billion in 2014, according to the results of a comprehensive study spearheaded by the Credit Union National Association (CUNA) and conducted by Cornerstone Advisors.

In a webinar for CUNA members Tuesday, CUNA Chief Policy Officer Bill Hampel updated the membership on the results of the study for the first time, and Chief Operating Officer Rich Meade provided an update on CUNA’s proposed bylaw modernizations.

Regulatory relief is CUNA's top advocacy priority, and CUNA has testified a number of times before Congress in recent years on the impact of regulatory burden on credit unions and their members.

CUNA began working on the regulatory burden study roughly 18 months ago, and as the study was preparing to launch, several legislators commented in congressional hearings that banking regulators seemed to lack sufficient information on the costs associated with the regulations applied to financial institutions. 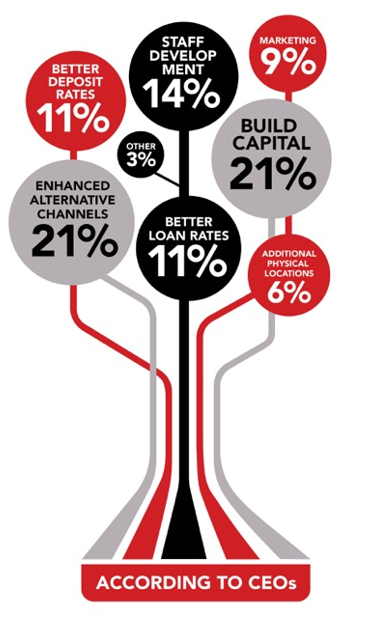 Click image to enlarge. A CUNA graphic showing how credit union CEOs would have allocated funds if not spent on regulation.

“The idea was to develop accurate measures of the financial impact of regulations on credit unions,” Hampel said. “We’re not saying that credit unions should not be regulated. But we do think that policymakers, when they impose those rules on credit unions, should have a better understanding about how much it costs.”

The study consisted of a deep dive into one small, one medium and one large credit union, categorized by asset size, followed by rigorous data collection and analysis from an additional 53 credit unions.

Going forward, CUNA will be developing a summary document for policymakers and their staff and a state-by-state breakdown. The latter that will allow individual credit unions to gauge their regulatory costs by looking at the burden for different asset sizes that can be applied to any credit union.

Meade addressed the CUNA board’s decision in December to take steps modernize the organization’s bylaws, explaining how the process would unfold over the next few months, and what its intent is.

“The goal is to make CUNA more welcoming, open, transparent and responsive to credit unions, credit union leagues and partners,” Meade said, adding that a lot has happened since CUNA first established its bylaws in 1934.