Misconceptions abound among CUs not offering debit rewards.

Consumer demand for debit rewards programs is on the rise.

In fact, repeated surveys find rewards as the highest-ranking priority for consumers choosing where to bank—yet 61% of credit union decision-makers are unaware of this fact.

This is but one insight uncovered in the new “Banking Rewards: Perceptions and Awareness Survey” delivered by CUNA Strategic Services and Buzz Points.

What members call rewards programs are generally called loyalty programs from the financial institution’s perspective. Not surprising as increased loyalty—via more products utilized and being the primary payment card used for transactions—is a primary goal of such programs.

This should be the tip of the iceberg.

Among issuers satisfied with their debit card rewards program, there is little variance on what is pleasing them. It’s no surprise that revenue and loyalty are top reasons, but somewhat surprising is the altruistic winner: the value it provides members. 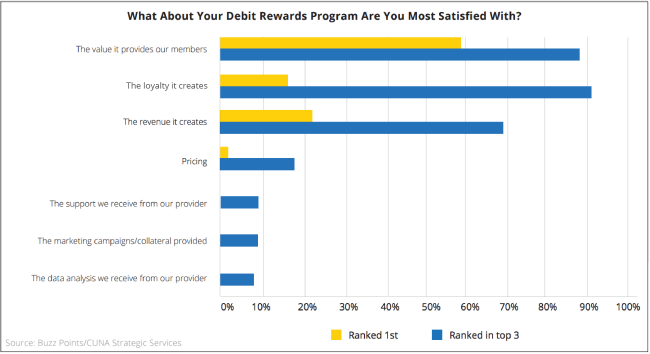 “The loyalty it creates” (91%) and “value for our members” (88%) were nearly tied for credit unions ranking it in their top three reasons for satisfaction (with “generating revenue” in the ballpark at 70%).

But adding value to members rises to the top by gaining 59% of first-place votes, with revenue a surprisingly distant second at 22%.

Support, marketing, and data insight scored remarkably low, suggesting that some rewards providers are underperforming in the delivery of these services.

Ongoing engagement programs, in-depth data analytics, and cardholder support are key components that credit unions should seek from their rewards provider. Since they are proven to drive greater success, they should be part of the ROI for credit unions.

Among credit unions not offering loyalty programs, 53% are at least somewhat likely to add such a program in the next twelve months. Those credit unions are, for the most part, seeking what current institutions offering rewards are satisfied with.

But what’s holding back nearly half of credit unions?

Nearly half of decision-makers (46%) cited integration with their core as a significant concern. This suggests that rewards providers need to do a better job communicating the implementation process, as many do not even require a direct core integration, operating from much simpler data reports.

Unsurprisingly, “the cost of the program” was at the top of the list, with 88% including it in their top three concerns and 45% citing it as their No. 1 concern. This again suggests loyalty programs are not viewed in a holistic sense.

Even looking beyond the revenue gains, a well-managed loyalty program should provide actionable data analytics that typically only the largest financial institutions can afford. 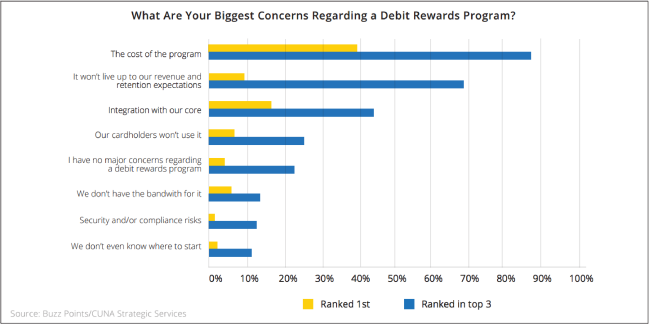 Perhaps the biggest missed opportunity, however, is simply awareness. The survey presented hard-hitting research stats demonstrating consumers strongly expect banking rewards, and make decisions on where to do their banking and which payments card to use based on the rewards offered.

In each case well more than half of respondents were not aware of this fact.

The “Banking Rewards” survey uncovered that greater awareness and understanding of loyalty programs changes the priority level credit union decision-makers assign to investing in a program.