LINCOLN, Neb. (2/26/16)--Politics, modernization and the regulatory environments were among the hot topics at the Nebraska Credit Union League’s annual conference earlier this month.

At the Jam the Unicam event, which refers to the state’s unicameral legislature, Gov. Pete Ricketts thanked credit unions for serving the state’s consumers, shared his legislative priorities and offered a State of the State overview. 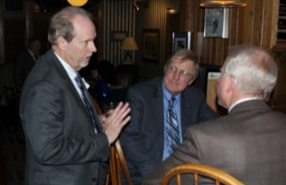 This year’s other speakers focused on elections, state legislation and the state and federal regulatory environment.

Randy Adkins, associate dean of the University of Nebraska-Omaha Arts and Sciences Department, broke down the trends of past national elections and what those trends might reveal about the November elections.

Banking, Commerce, and Insurance Committee Chair State. Sen. Jim Scheer (R-Norfolk) also discussed legislative developments related to financial services. He introduced an interim study this session that will look for ways to modernize both the state credit union and bank acts. He expects a working group of interested parties to meet throughout the interim to work on modernizing both acts.

Nebraska Department of Banking and Finance Director Mark Quandahl discussed the challenges created by retirements within the department, which is now cross-training examiners to avoid staffing shortfalls.