MADISON, Wis. (3/10/16)--Credit unions are known for supporting their communities with human and financial capital, and lately, the amount of charitable giving has been gaining press coverage of the credit union difference.

In Kansas, Shawnee County commissioners unanimously voted to adopt an agreement between the county, Quest CU and the Shawnee County Parks and Recreation Foundation to improve Skyline Park, site of the tallest place in Topeka--Burnett’s Mound (Topeka Capital-Journal March 7).  The Topeka, Kan., credit union will donate $180,000 over the next six years to make improvements to the county-owned, 106-acre park. Skyline Park in southwest Topeka. The park is the site of Burnett’s Mound, the tallest place in Topeka. 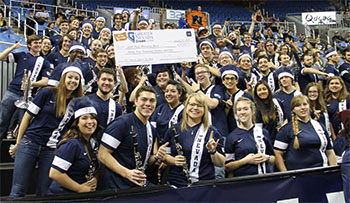 Quest CU will donate $90,000 to establish trailheads, signs or maps, trail markers and structures, while the other $90,000 will fund an endowment for future maintenance and improvement.

CSE FCU, Lake Charles, La., provided a $10,000 sponsorship for “An Afternoon with Musicmakers” that brings together student and professional musicians. MusicMakers refurbishes and cleans donated instruments or purchases new instruments to give to students in the Imperial Calcasieu Parishes (eNews March 9).

Music is an integral part of Greater Nevada CU’s community support in Carson City and Reno, Nev.  The credit union recently donated $45,000 to the University of Nevada-Reno's Pride of the Sierra Marching Band, bringing its historical donations to $150,000 in the “It’s Time to Support Our Band” four-year partnership. It also donated $3,106 to the Carson High School Blue Thunder Marching Band. Greater Nevada has had a branch inside of the high school since 1996 and became an official sponsor of the school’s band in 2015.The credit union also sponsors high school bands in Washoe County.

MyCFE4Schools debit card program resulted in $103,600 going to three public school districts in Florda. CFE FCU, Lake Mary, Fla., donates 5 cents to the school district every time a member makes a signature-based transaction. It donated $60,400 to Orange County Public Schools, $25,800 to the School District of Osceola County, and $17,400 to The Foundation for Seminole County Public Schools.

School spirit played into the success of Indiana Members CU, Indianapolis, and its $1,050 donation to Brownsburg (Ind.) High School as part of an ongoing school spirit debit card program.

Branch managers of Great Lakes CU, Bannockburn, Ill., were given the opportunity to determine the recipients of this year’s charitable donation. The board called for the suggestions, and a total $39,000 is being donated to 13 organizations throughout Lake, McHenry, Cook, DuPage and Will counties in Illinois.