WESTBROOK, Maine (3/11/16)--The Maine Credit Union League’s shadowing program with state legislators is reaping rave reviews from both participants and lawmakers in its first few weeks.

While only a handful of pairings have taken place, more than 10 job shadows are scheduled for March, and the league is encouraging additional participants to sign up. The length of job shadows are up to each participant and range from a few hours to a full day, depending on availability and schedule. 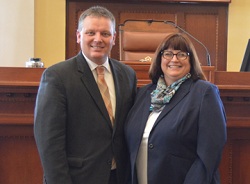 The first job shadow was in early February and matched Ginny Hughes, senior vice president at Changing Seasons FCU, Hampden, Maine, with Senate President Mike Thibodeau (R-Winterport). Of her experience, Hughes said, "I especially liked receiving an ovation from the senators when my name was announced on the Senate floor. It was an educational day for me."

Thibodeau had a similar response, saying that he appreciated Hughes "taking the time to come, participate and learn more about how the Legislature works. It was helpful for me as well, to learn more about credit union issues."

The program is open to all Maine credit union staff and volunteers through mid-April.

"There is still time to participate in this program, and it benefits everyone involved, especially in helping to build and strengthen relationships and understanding between credit unions and legislators," said Elise Baldacci, league director of governmental affairs.