The High Cost of Regulatory Burden

CUs struggle to deal with the enormous, and growing, impact of regulatory compliance.

On any given day at Marathon County Employees Credit Union in Wausau, Wis., you’ll find Anne Heggelund working the drive-through lane or staffing the teller line. It’s simply part of the many “other duties as assigned” for small credit union CEOs.

But one of those “other duties” has become increasingly burdensome for Heggelund, president/CEO of the $22 million asset credit union: regulatory compliance, particularly in the areas of Truth in Lending and the Real Estate Settlement Procedures Act.

Compliance, she says, is both time-consuming and expensive. Marathon County Employees has spent thousands of dollars recently on forms related to compliance changes.

“The fact that we’re spending that money on forms means we don’t have it to pay a higher dividend on savings or to add new products,” Heggelund tells CUNA’s News Now. “Because we’re spending so much on compliance, we don’t have as much to spend on things that will protect or benefit members.”

CUNA is showcasing the results of the regulatory burden study to educate lawmakers and others about the financial impact of excess regulation on both credit unions and members. CUNA created a summary document for policymakers and their staff, in addition to a state-by-state breakdown of costs.

“We’re not looking to eliminate all regulation,” says CUNA President/CEO Jim Nussle. “But we absolutely will use the results of this study to roll back or modify many harmful rules to reduce the negative impacts on credit unions and their members.”

He encouraged credit union leaders to tell CUNA how rules are affecting their operations and to comment on new rules as they are proposed.

“We’re going to bring this up over the next few years at every opportunity when policymakers are considering issues related to changing, increasing, or decreasing regulations,” adds Bill Hampel, CUNA’s chief economist and chief policy officer. “So in addition to the reported benefits of regulations, we’ll be able to point out the costs.” 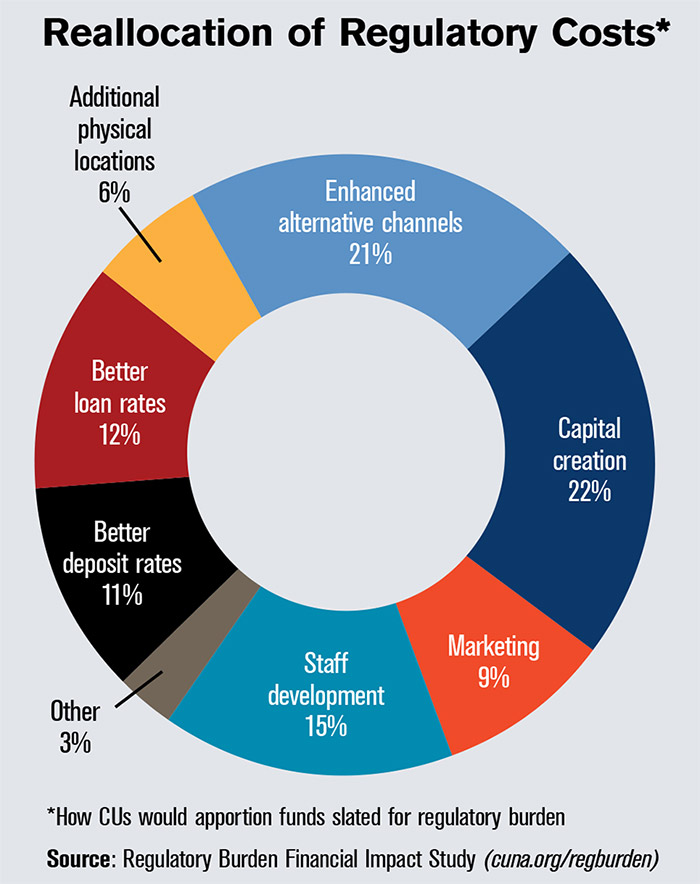 Small CUs bear the brunt

Since the start of the financial crisis, credit unions have been subjected to more than 190 regulatory changes from at least 15 federal agencies, resulting in more than 6,000 Federal Register pages to review and implement, CUNA reports. That doesn’t include modifications to the NCUA Call Report.

While the relative cost for large credit unions is lower, the dollar impact is significant. For example, the median regulatory cost for a $1 billion credit union is $4.4 million, compared with $1.1 million at a credit union with $100 million in assets.

“This suggests that… member-facing staff have to divert much of their attention from serving members to complying with regulations,” according to the report.

• Third-party expenses (22%), including compliance, technology, legal services, and training; and

Credit union CEOs report they would have allocated funds spent on excess regulatory compliance to increase the benefits of membership, either in terms of better rates, lower fees, and/or enhanced products and services (“Reallocation of regulatory costs”).

“Small credit unions are dealing with bottom-line issues because of the interest-rate compression that we’ve all experienced the past several years,” he tells News Now. “We’re all running pretty lean right now to control expenses.”

Dodd-Frank and the CFPB create “thousands and thousands of pages of new regs every year,” Michael says. He questions the intended target and goal of all those new rules. “A lot of the regulation is intended to stop bad practices, and I don’t think small credit unions have ever been accused of being involved in bad practices.”