Strong engagement by Maine CUs at state legislative day

AUGUSTA, Maine (4/6/16)--A record turnout of Maine advocates resulted in a strong credit union presence in Augusta, Maine, during the Maine CU Day at the State House last week.

"We once again demonstrated the engagement strength of Maine's credit unions by having such a significant presence attend this event,” said John Murphy, president of the Maine Credit Union League.

Nearly 125 credit union representatives met with their local legislators, highlighted the important role that credit unions play in communities across Maine and provided examples of the credit union difference. 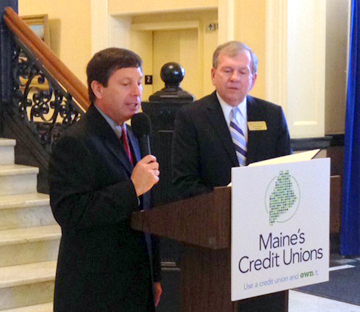 “Advocacy and relationships are such an important part of political and legislative success, and having such a large delegation from credit unions reinforces the importance that credit unions place on involvement.” Murphy said. “The legislators appreciated meeting with their local credit unions, and hearing about local issues and concerns.”