Awareness and blockchain initiatives aim to engage and strengthen the CU system.

Seattle, home to some of the world's most progressive companies, served as fertile ground this week for credit union advocates to digest and discuss progressive ideas that will strengthen the movement.

More than 1,000 people attended CUNA’s America’s Credit Union Conference, which packed into its four-day run the unveiling of a pair of major system-wide initiatives, insights from a series of thought leaders and industry experts, access to one of the industry’s most expansive exhibit halls, and enlightening tours of two of the best-known brands in the Emerald City. 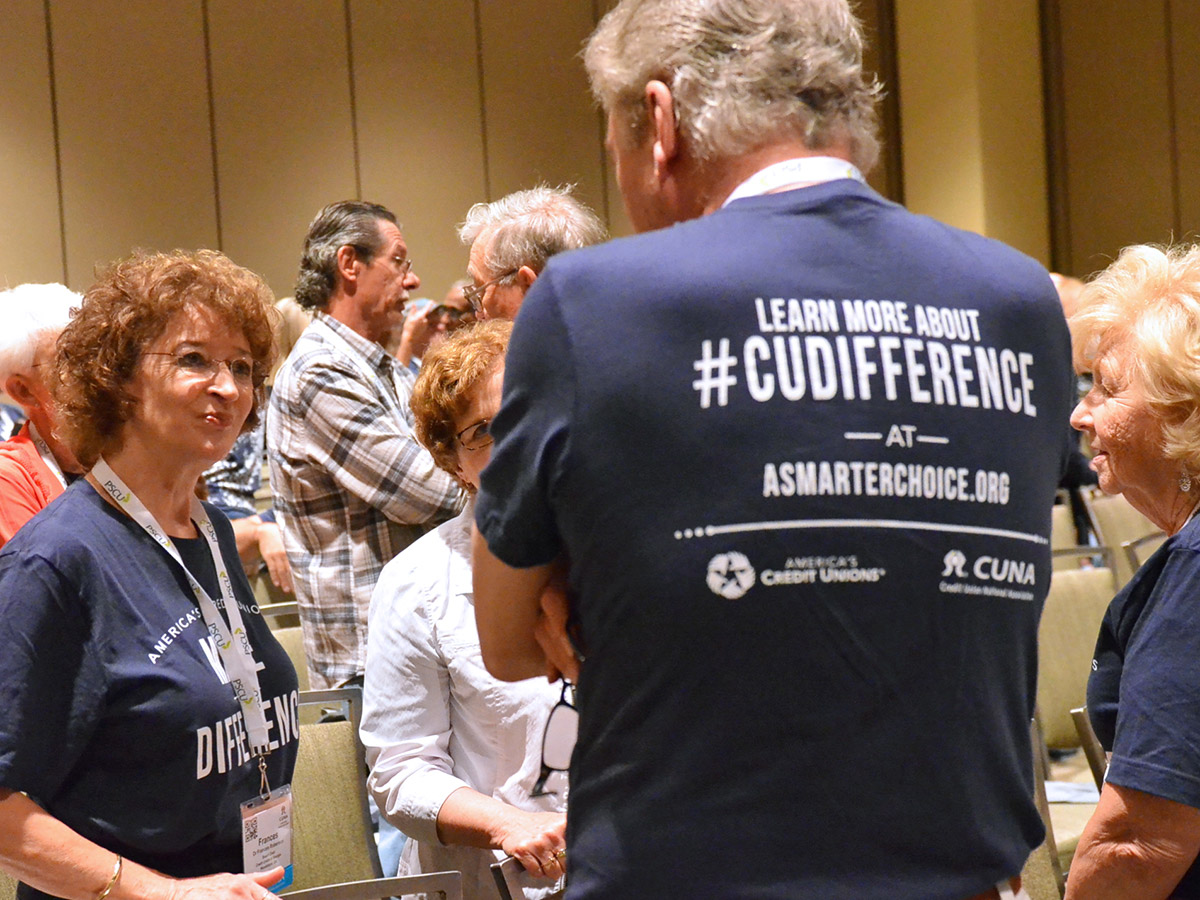 Click to enlarge. The T-shirt won by America’s CU Conference attendees encourages consumers to “Learn about the #CUdifference at asmarterchoice.org.”

ACUC aims to catalyze credit union growth through innovation and transformation, but the event doubles as a celebration of credit unions’ collaborative spirit—and the people who drive the movement forward.

Here’s an overview of what transpired this week in Seattle. Click on the links to access in-depth coverage of each topic—and save the date for ACUC 2017, slated for June 25-28 in Las Vegas:

Credit unions must increase their relevance or risk falling behind in the financial services marketplace, says Jim Nussle, CUNA president/CEO: “I want to start moving the needle on creating that awareness.” he says. To that end, CUNA provided a first look at a new effort designed to align credit union messaging nationwide, with a goal of growing market share and advocacy power. Check out the campaign website (cuna.org/awareness), and in coming months look for a toolkit that features the research-proven messages credit unions and leagues can leverage with their own communications and marketing efforts.

CUNA introduced a joint blockchain initiative with the Mountain West Credit Union Association that will position credit unions to take advantage of this emerging technology, which CUNA Chief of Staff/Chief Operating Officer Rich Meade categorizes as a “game changer.” A network based on this shared-ledger technology could provide credit unions increased efficiency, security, and speed. To learn more and engage as a “test node” for blockchain, visit culedger.com.

►A call for collaboration

Credit unions will realize their greatest success if they work together on issues such as advocacy, creating awareness, and providing solutions for service excellence, CUNA Board Chairman Rod Staatz says. “CUNA working with leagues and credit unions is the strongest, most prominent advocate for credit unions in America,” says Staatz, president/CEO of SECU of Maryland in Linthicum.

►‘We’re not going to micromanage’

NCUA Chairman Rick Metsger pledges to implement changes that improve the system’s soundness and member service, such as recent updates to member business lending rules and important upcoming changes to field-of-membership rules. Now, the agency is considering lengthening the exam cycle. “We will ensure that you’re serving safely and soundly, but we’re not going to micromanage your business,” Metsger says.

►A Hero among heroes

Retired VSECU President/CEO Steven Post accepted Credit Union Magazine’s Credit Union Hero of the Year award with aplomb. “I have always felt there are many, many heroes at work in the credit union industry,” Post says. “And I’m honored to be counted as one of them.” The award, sponsored by CSCU, recognizes individuals who serve as examples for the entire movement through their service, advocacy, and commitment to credit union ideals.

►Obsess over your members

Credit unions should “become completely obsessed” with what members need and want, keynoter Charlene Li urges. This gives credit unions the ability to create specialized experiences for their membership. To be a force of disruption, credit unions must have the “audacity to create a movement where people absolutely believe in what you do,” Li says.

►A challenge to disrupt

Keynoter Josh Linkner issued a challenge to attendees: In the next seven days, find one idea for creative disruption. "Just think about it," he says. "Don't wait for money or regulatory approval." The entrepreneur and author provided five strategies for credit union leaders to turn their organizations into engines for innovation.

►The power of promises

Live with a purpose and commit to yourself and others, urges keynoter Alex Sheen, CEO of the nonprofit organization because I said I would, which underscores the power and importance of promises. Somewhere we lost sight of accountability, Sheen says, and it’s easier to point a finger than to say or see what you can do. “Think about the commitments to the people you love," he says.

It’s time to be intentional in how we live our lives, says presenter Scott Mautz, a former business executive, because intention brings meaning to our existence. And there’s no better way to live intentionally than to create a legacy of actions that improve the lives of others, says Mautz, who offers five pathways to that goal.

Experiential breakout sessions to two of the world’s most influential organizations provided many ACUC attendees immersion lessons in branding and philanthropy. The Starbucks Reserve Roastery & Tasting Room is considered “the ultimate expression of the Starbucks brand,” while the Bill and Melinda Gates Foundation is a primary driver of solutions to worldwide problems of massive scale, awarding $4 billion in grants annually.

Discovery and Industry Trends breakout sessions tied together technological advancements and consumer trends into themes such as strategies for sustainable growth must incorporate technology , the potential for credit unions to leverage members’ trust to their competitive advantage, and the impact successful payments strategies have on credit unions’ ability to attract millennials.

Vendors represent all facets of the CU system