Let's allow inflation to prove it's a problem before raising rates.

The stock markets continue to hit record highs this year, as the “Trump bump” remains in full force. The capital markets share my view that the business environment will be more favorable under a Trump administration, but the run-up is premature because we still lack specifics on many aspects of the new administration’s fiscal policy.

The Fed’s rate-raising intentions—and its obtuseness to facts that don’t support its narrative—don’t breed confidence that the Fed will make the right decisions when it comes to steering this growth.

The reality is that the Fed’s rate forecast has missed widely for five years in a row. The Fed's decisions and narrative demonstrate a heavy bias toward employment measures at the expense of gross domestic product (GDP), inflation, and the nuances of employment, such as participation rate. And the Fed seems to lack a full appreciation of the unique circumstances of rates near zero for seven years and a massive balance sheet created from its quantitative easing operations.

Even the Fed’s Washington, D.C. economic staff has grave concerns—chief among them that the Federal Open Market Committee (FOMC) still takes a pre-emptive approach to fighting inflation, which still isn’t worthy of fighting and puts the economy at grave risk of recession.

As you know, the Fed has a dual mandate: full employment and price stability, meaning controlled inflation. At this point, the Fed believes the economy is at full employment, leaving only one thing to focus on—inflation.

To understand this focus, let’s look back in history. During the late 1970s and early 1980s, inflation was out of control. The newly appointed Fed Chair, Paul Volcker, and the FOMC decided to raise rates and eventually “break the back of inflation.”

What the Fed accomplished under Volcker’s leadership eventually gave rise to canon that all Fed Chairs have since followed. A central tenet is that inflation is economic enemy No. 1.

As a result, the Fed has since taken a pre-emptive approach to combating inflation. If the Fed even suspects inflation is emerging, it will want to raise rates because it never wants the inflation of the late 1970s and early ‘80s to grip the economy again. 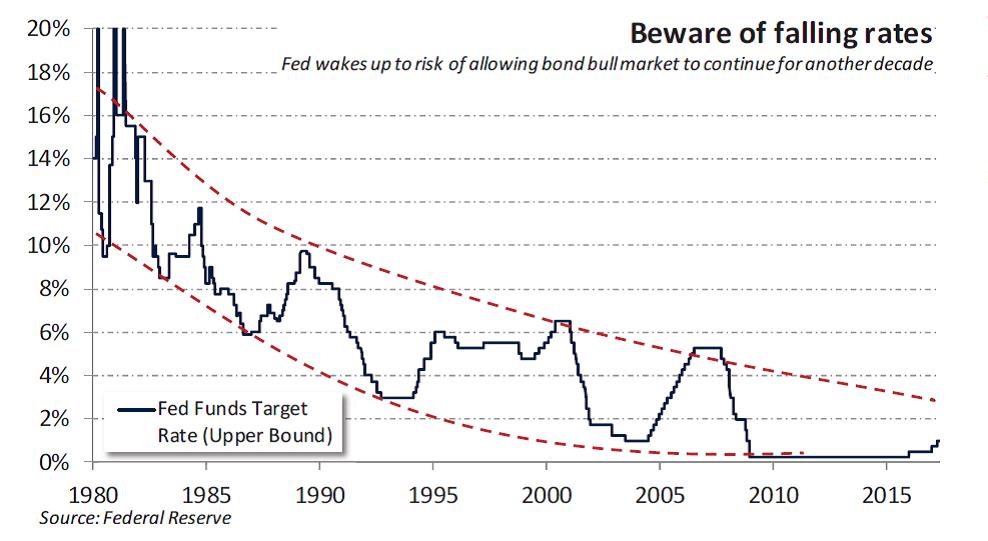 Click image to enlarge. Data shows that both the upper and lower bounds of interest rates have been steadily decreasing over the last few decades.

But much has changed since Volcker’s day, and what worked then might not work now. Data shows that both the upper and lower bounds of interest rates have been steadily decreasing since Volcker’s run. The Fed’s own economic staff believes this downward trend might be caused by the FOMC’s excessive focus on pre-emptive management of inflation risk.

If the Fed tightens too soon during an expansion, the economy never hits full stride and the economy doesn’t realize the full benefit of an expansion. The net effect is that the expansion gets cut short and the next recession gets pushed forward, requiring the Fed to lower rates to stimulate a recovery.

If the Fed tightens too soon, too many times, it eliminates maneuvering room to adjust rates. To put it in perspective:

In other words, if a recession hits, the Fed would need to keep rates at the zero lower bound (ZLB) for an excessive period of time, perhaps a decade or two—just like Japan—to recover. The shallower the rate cut, the longer it needs to be in effect to achieve the same result.

Instead of pre-empting inflation by raising rates, the FOMC needs to go back to a reactive inflation management posture. Let inflation prove it’s a problem—don’t act in anticipation of inflation.

The Fed followed post-Volcker canon when it raised rates in the first quarter of 2017, which I believe was a mistake. Inflation risk is low because GDP remains weak. Employment measures, while improving, aren’t as strong as the unemployment rate would suggest due to a low labor participation rate. It doesn’t matter if the low participation rate stems from retirement or workforce dropouts. A lower participation rate means lower economic potential and lower risk of inflation.

In contrast, the risk of recession is high if the Fed continues to hike rates in an effort to fight inflation that likely will never materialize. And if a recession hits, rates could be at the ZLB (zero lower bound) for well over a decade.

What works when rates are 10%, 8%, 6% or even 4% might not work the same—at least not the way the Fed intends—at the ZLB, and with trillions of dollars of quantitative easing on the balance sheet.

The risk and repercussions of recession are far greater than any threats inflation poses at this point. The Fed needs to raise its inflation tolerance and give GDP a chance to run, allowing the economy to expand. It’s the only way to get back the maneuvering room the Fed seeks, and avoid a lost decade or two.

TODD HARRIS is the CEO of Tech Credit Union, a $2 billion credit union serving more than 85,000 members throughout the San Francisco Bay Area.