Lisa Brown will share the CU story during her run for city commissioner.

Brown’s story is truly credit union-inspired. Not only has her credit union journey given her the community-building experience to prepare her for public service, it has empowered her with a deep belief that credit unions’ people-helping-people philosophy can carry over to local politics. 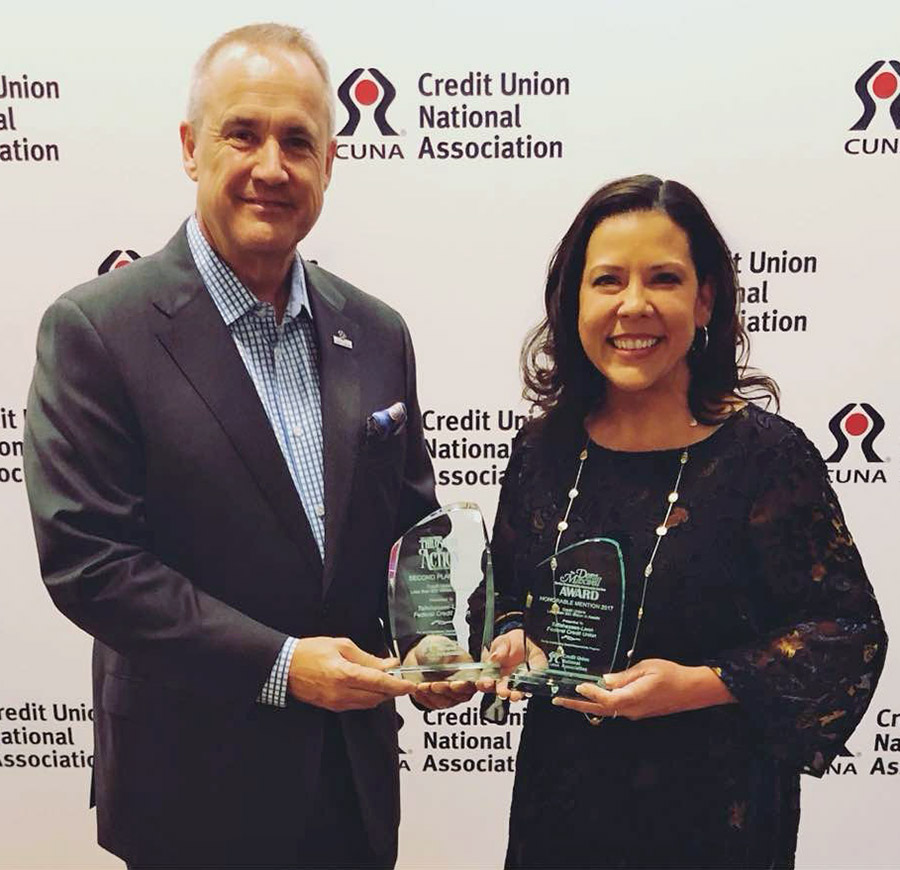 Click to enlarge. Tallahassee-Leon has earned a long list of industry honors under the leadership of President/CEO Lisa Brown, including a second-place 2017 Louise Herring Award for financial education and an honorable mention as Dora Maxwell Award winner for social responsibility from CUNA. Here, Brown, right, is congratulated for earning the awards by CUNA President/CEO Jim Nussle.

“My experience in the actual implementation of community projects really sets me apart” from other candidates, says Brown, president/CEO of $55 million asset Tallahassee-Leon Federal Credit Union in Tallahassee, Fla. “We've achieved results. That’s where I stand apart in comparison to someone who just wants come in and talk about ideas. Ideas are easy and execution is hard. We’re experts at execution. We’re already moving the needle in our community.”

Tallahassee-Leon Federal’s biggest “needle-mover” is the $1.7 million grant it received from the U.S. Treasury Department for its status as a Community Development Financial Institution. The credit union used the grant to create a program that provides auto loans to credit-impaired members.

“Access to transportation can be life changing,” Brown says. “It can be the difference between a 15-minute drive and an hour-and-half commute on public transportation that isn’t always there when you need it. It allows people to get jobs, take their kids to school, and put food on their table.”

Tallahassee-Leon Federal has earned a long list of industry honors, including a second-place 2017 Louise Herring Award for financial education and an honorable mention as Dora Maxwell Award winner for social responsibility from CUNA.

It also hosts the Mini-Billionaire’s Academy Summer Camp program, which teaches kids about money in a fun way. Brown says the camp takes an experiential learning approach that covers personal finance “from A to Z.”

She says the program “speaks to her soul. There’s something magic when the light bulb goes on.”

She tells the story of a troubled, 15-year old girl who took Brown aside and said, “I had no idea how expensive kids are.”

“She’s entering a vulnerable stage of her life, and already she understands how life-changing some of her day-to-day decisions will be,” Brown says.

Last summer, the camp, which will celebrate its eighth year in 2018, reached 650 kids. “That’s quite an accomplishment for a $50 million credit union,” Brown says.

In addition, Brown has earned the International CUDE designation through the World Council of Credit Unions, and has traveled worldwide to advance credit union principles. She also cites her membership with the World Council’s Global Women’s Leadership Network as a source for ideas and inspiration.

Such experiences have provided Brown with a sense of empowerment that has inspired her to run for office.

“This is never something I thought I would be doing,” she says. “My work through credit unions has given me the opportunity to work with communities around the world from a governance perspective, as a well as from a grassroots perspective, both on macro and micro levels.”

Brown even asked CUNA President CEO Jim Nussle for some advice on steering her campaign. Nussle served in the U.S. House of Representatives from 1991 to 2007.

During his tenure, he served as chairman of the House Budget Committee, a key panel that oversees the federal budget process, including review of all bills and resolutions on the budget. In addition he was a member of the House leadership, and served on Banking and Ways and Means Committees.

“He told me to share the credit union story,” she says. “That’s going to be the fun part. We have a great story to tell. I’m living proof of it.”