Member Benefits
Learn more
Learn more about the benefits of membership.
Home » All aboard for a quack-tastic time
Management ACUC18 Saturday

All aboard for a quack-tastic time

Attendees experience a Boston Ducks Tour during an experiential session.

Before climbing aboard the Beantown Betty and heading out for a Boston history lesson, America’s Credit Union Conference attendees learned what sets the brightly colored amphibious vehicles apart from other tour companies in the city.

“Our job is to make people happy and show people this amazing city,” says Bob Schwartz, director of marketing and sales for the Boston Duck Tours. 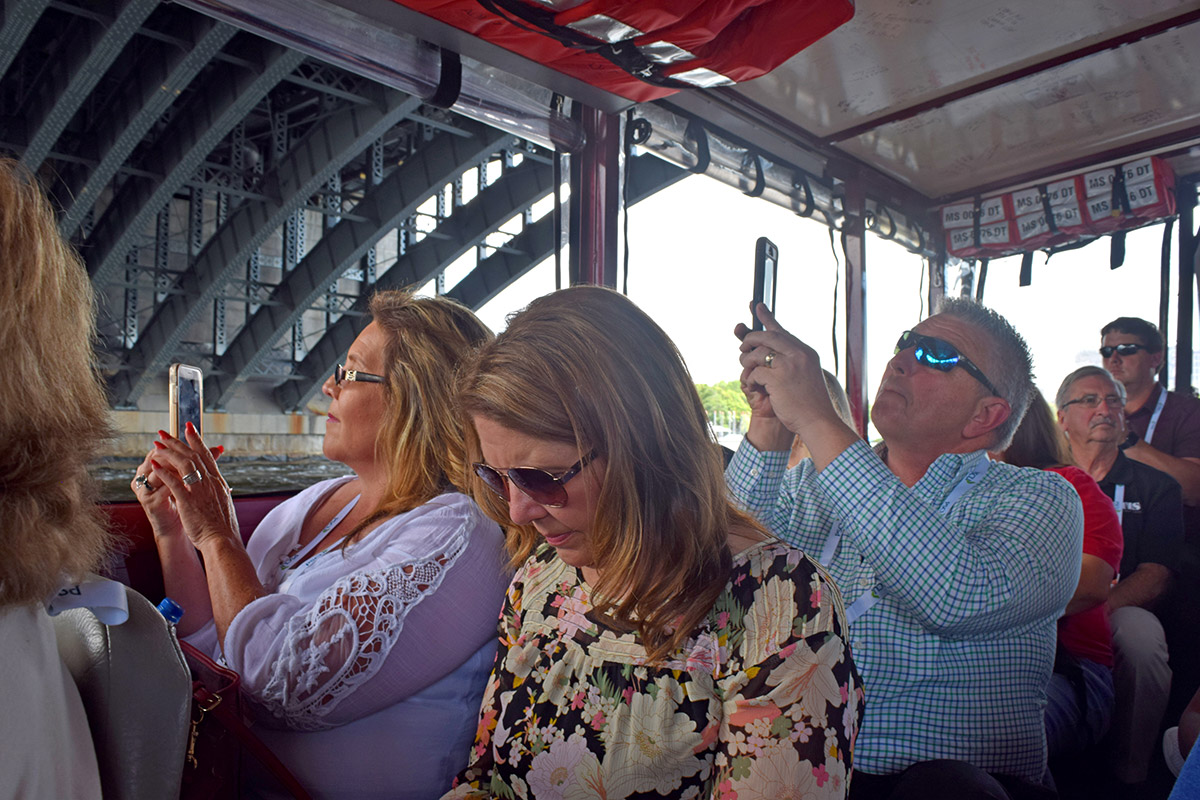 Click to enlarge. Attendees snap photos of the Boston skyline while traveling on the Charles River.

More than 50 conference attendees experienced first-hand what sets the Boston Duck Tours apart from other tour companies in Boston during an experiential session Friday afternoon. After hearing from Schwartz, they embarked on a 90-minute tour of Boston—including a trip down the Charles River.

With a fleet of 28 replicas of World War II DUKWs—a cargo-carrying vehicle that could travel on land or water that was designed in 1942—that are each painted a different color, have different names, and are staffed with quirky conductors that tell Boston’s story, the Ducks are a common sight in Boston.

The Boston Duck Tours was recently voted the eight best tour experience in the U.S.  by Trip Advisor. As a company that relies primarily on word of mouth for advertising, Schwartz says they aim to give guests an experience they’ll appreciate, remember, and recommend to others.

That means giving guests a chance to drive the Duck as it travels down the Charles River, allowing veterans to sign the vehicle’s roof, and offering tours in nine languages so foreign visitors get the same experience as English-speaking passengers.

“We realize people come from around the world,” Schwartz says. “And they deserve the same respect, guest service, and experience as everyone else.”

The company also has a philanthropic arm—the Quack Quack Give Back—which allows passengers to round up their ticket price to the next dollar. The company matches that donation and distributes funds among six local charities.

“We like dealing with locally based nonprofits,” Schwartz says. “They’re smaller and we make a bigger impact.”

Harold Hurst, a director at Service First Federal Credit Union in Danville, Pa., says he was thrilled with the experience he got on the tour.