CU with staff of 8 serves members through hurricane, aftermath

The historic devastation left by Hurricane Michael in early October has left damage that the Florida panhandle, among other regions, is still recovering from. As the region recovers from the billions of dollars in damages left behind, several small credit unions have stayed open from the earliest hours of recovery, ensuring members (and non-members) have access to financial services they need to get back on track.

Jackson County Teachers CU is based in Marianna, Fla., a city in the northern part of the panhandle. The city was hit by the core of Hurricane Michael, with winds as high as 120 MPH, leaving damage that has been described as resembling a bomb blast.

Valena Alexander, president/CEO of Jackson County Teachers CU, who runs the credit union with seven other female staffers, said they spent the early part of the week with extended hours to help members to prepare for the storm, and running through its disaster recovery plan.

The storm hit the next day, and Alexander said she was able to cut her way out of her house and head to the credit union on Thursday, Oct. 11. After seeing “mass devastation” during her drive to the credit union, Alexander found out that, while one employee lost her home and other had major home damage, staff members and their families were safe. 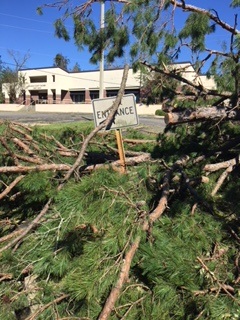 “My husband and I arrived at the credit union and started clearing both entrances, cutting and moving trees, tree limbs, downed power lines, cable lines and debris.  We were lucky enough to find a tree service company on their lunch break to come help us with the back parking lot that was littered with large oak trees.  That job required heavy equipment including a crane for tree removal,” she said. “I continued to reach out to my employees to find out who needed what assistance, but thanks to their preparation all employees were doing well.  All committed to be at work on Monday without hesitation.”

By Monday, Oct. 15, all employees had reported to work, and they started the morning discussing an action plan. They set up their first drive-thru lane as a teller walk-up, and the second for member services such as loans, member services and other solutions.

“Our credit manager was able to do loans on the spot transferring the money directly into the members accounts as well as our member solutions partner doing deferments upon request with no waiting for our members,” Alexander said. “We provided our members with snacks, cold waters, koozies and hand fans while waiting.”

Alexander said Jackson County Teachers CU’s online banking and mobile app have been a “lifesaver,” and that part of the post-storm services at the branch has been spending time with members to set them up with the app or online services.

They also implemented a call center and kept its website and social media accounts updates to keep members well informed of the credit union’s progress during discovery.

“We handled each member request with ease not missing a beat.  As the week rolled on we were able to share with our members their version of what happened as well as their plans to rebuild and repair their homes and property,” she said “Our members were very appreciative, telling us we were one of a few financial institutions open in town and how they couldn’t believe we were able to do this because it was just the eight employees. Each time I heard the comments I just simply responded ‘It is amazing what eight hard headed country girls can get accomplished,’ each member knowing our tenacity and work ethic, could do nothing but agree.” 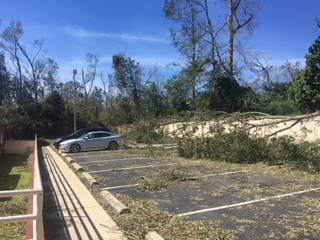 During the following week, Alexander and her staff bought supplies for members, including non-perishable meals, drinks and bug spray. On Friday, Oct. 19, they hosted a cookout for members with hot dogs, chips, cookies and cold drinks.

At night, staff members had generators running at home and Alexander would take laptops and hotspots home for charging. If batteries ran low during the daytime, she would charge things in the outlet on her truck.

Alexander praised her staff for dedicating themselves to member services during recovery, even as they were dealing with their own damaged homes and other losses.

“During this time each of my employees came to work without complaint. All the while knowing they had no power, no water and damage to their own homes, they were allowed to come and go to handle insurance adjusters and repairman request as needed,” she said. “We shared stories of heating our water to bath, washing our laundry outside and hanging it out on a clothes line as well as preparing our meals and cooking outside.”

As of Nov. 6, Jackson County Teachers CU is still without phone lines, but it has implemented three cell phone lines for its call center to provide access to debit card, loan and collections departments.

“Our members are very pleased with how we have handled the hurdles resulting from Hurricane Michael and we receive praise on a daily basis,” Alexander said. “We are doing deferments for members on an as need basis as well as providing interest free loans for members that need extra money for storm damage or expenses.”