'If people aren't aware of you, there is no moving on from there.'

BECU in Tukwila, Wash., has a storied heritage, and is known for delivering outstanding member experiences in the Pacific Northwest.

In 1935, at the height of the Great Depression, new employees for The Boeing Co. were required to purchase their own tools before they could start work—an insurmountable burden for many.

In response, 18 Boeing employees each contributed 50 cents to form the new Fellowship Credit Union with $9. The first loan was for $2.50, enabling a fellow employee to buy tools.

In 1949, Fellowship changed its name to Boeing Employees’ Credit Union to better reflect its primary membership base.

For much of its history, BECU was a well-kept secret outside of Boeing. In 2002, BECU obtained a new charter to expand membership eligibility to the entire state of Washington, and leadership recognized the need to grow its brand identity.

“When we introduced our brand to the market, we measured about 22% unaided brand awareness,” says Stephen Black, vice president of marketing and brand strategy for the $18.8 billion asset credit union. “Over the past 12 years, once we started branding and marketing in a significant way, we've taken that to more than 60% unaided awareness consistently.”

Today, with more than one million members and more than 50 branches throughout Washington and South Carolina, BECU regularly achieves 85% to 90% aided awareness in its market, and consistently ranks among the top brands consumers would either consider or select.

“When you look at the growth success we've had, those marketing statistics really tell the story,” Black says. “If people aren't aware of you, there is no moving on from there. Coming from a place of being fairly unknown to now occupying the top position in brand consideration is a great success story.”

More recently, BECU initiated a rebranding and logo redesign. The existing BECU logo contained a scripted “e” that differed in font and style from the other letters. This made reproducing the logo difficult in certain formats, and logo signage was challenging to read from a distance.

In addition, the original stylized “e” concept was meant to emphasize the “employees” in Boeing Employees’ Credit Union, which was no longer as relevant given the credit union’s broad new charter.

BECU worked with its branding agency, Phinney Bischoff, to design a new logo that would fully represent the cooperative’s brand identity and strategic focus, and would be easier to reproduce in a wide range of advertising and branding contexts.

Together, BECU and Phinney Bischoff conducted an extensive discovery process where they interviewed members, non-members, employees, and other key stakeholders to understand what the credit union’s brand represented.

The ultimate design incorporated elements of BECU’s history and heritage, and included a call-out to the members and Boeing employees via a single rounded corner accentuating the “U” in BECU. 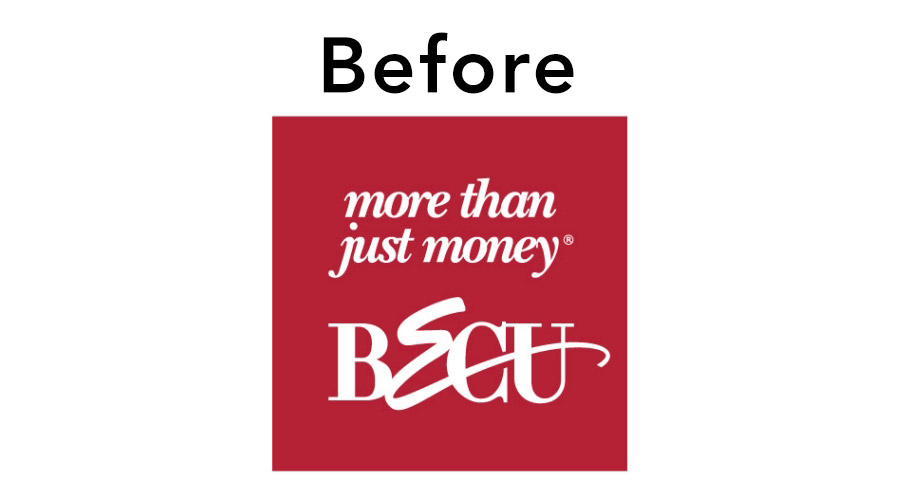 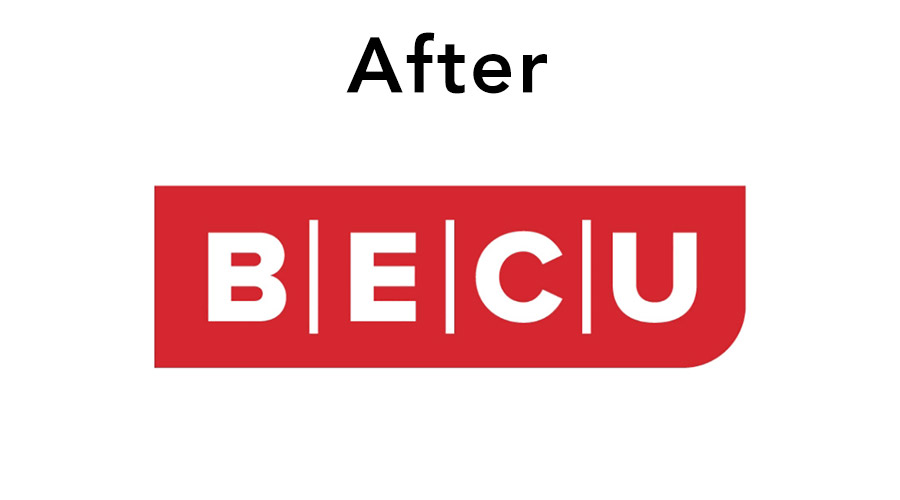 Black kept his internal project team to a small group of five individuals, including a few senior executives and marketing team members, who reviewed more than 200 logo variations. The entire process from concept to brand launch took just under a year.

At launch, BECU created a special landing page to educate members about the rebranding and the reasons behind it. Thanks to social media, member feedback was instant.

“We initially hoped for universal acceptance, love, and joy,” Black says. “However, we quickly realized that change is difficult, and some people have stronger reactions. Following the first full weekend of the launch period, we saw about 86% positive sentiment and about 14% not-so-positive.

“When you look at it that way,” he continues, “it was really affirming. We understood that yes, it's going to be a challenge, and not everybody's going to love it, and that's OK. But they could read the origin story behind it, and that we stayed committed to it.

“As we rolled it out over time,” he says, “and you see it in use, that's really what brings it home for people. It's one thing to see it just onscreen, but it's another thing to see the new design in your neighborhood time and again. We continue to measure brand awareness twice annually. In our last study, our numbers had stayed strong.”